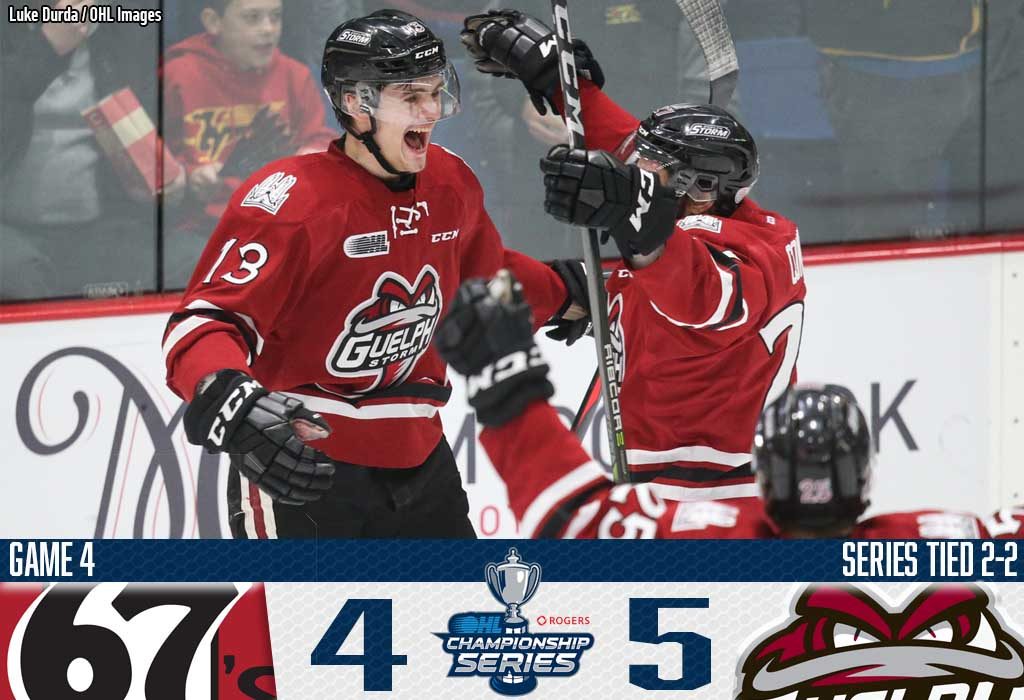 It’s deja vu all over again.

After dropping Games 1 and 2 in a third straight round of the playoffs, the Guelph Storm have returned to home ice and righted the ship, knotting the Rogers OHL Championship Series at two wins apiece with a 5-4 triumph in Wednesday’s Game 4.

“We have started playing a more simple and smarter game,” said Toropchenko of the Storm’s success back on home ice. “We have been winning a lot more puck battles, being more physical against Ottawa and sending more pucks toward the net. If we don’t shoot we won’t score so I think we have done a good job at doing the simple things better.”

“We’ve won more faceoffs, we’ve had the puck more,” he said in contrast to the first two games of the series. “In Games 1 and 2 we chased the game a little bit due to lack of faceoff success. The power play got a couple of big ones tonight. Momentum is huge and we saw it swing a couple of times in the last three minutes of the game tonight and thankfully it wasn’t the difference in the hockey game.

“We’ve got two good teams and I’d expect them to play their best game and we’re going to try and play our best game on Friday night.”

The 67’s showed early signs of a bounce back effort on the heels of a 7-2 loss on Monday, holding the Storm to just one shot on goal through the game’s opening seven minutes. Stay-at-home blueliner Hudson Wilson (1) scored his first career playoff goal to bring a hush over the capacity crowd of 4,983 at the Sleeman Centre.

A trip to the power play got Guelph going with 7:56 on the clock as Arizona Coyotes prospect Nate Schnarr (7) shovelled a rebound underneath Ottawa netminder Cedrick Andree. Suzuki picked up an assist on the goal to record his 36th point and surpass Martin St. Pierre (2004) for the most by a Storm player in a single playoff season.

The red hot Toropchenko struck just over a minute later to put the Storm in the lead for good, barreling down the middle to net a Domenico Commisso-inspired rebound as Guelph led 2-1 after one.

Russian teammates Pavel Gogolev and Toropchenko took out a Guelph insurance policy 6:46 into the second as the two cashed in on a fast break through the neutral zone. The former fed the latter who chipped a backhander over a sprawling Andree as the big Guelph crowd went wild.

Suzuki went to work with 6:26 left in the second, finding big captain Isaac Ratcliffe on the opposite side of the offensive zone before taking a return feed and toe-dragging a quick release over the shoulder of Andree as the Storm were in full control up 4-1.

Facing an uphill climb, overage winger Lucas Chiodo (9) gave the 67’s hope with 1:38 left in the second frame. The 5-foot-6 winger took advantage of a tired Storm unit, snapping a wrister through traffic past Anthony Popovich to bring Ottawa within two headed into the third period.

Guelph’s power play converted again 2:28 into the third stanza, reinstating the three-goal cushion as some quick thinking from Suzuki resulted in a centering feed for big Liam Hawel (4) who made no mistake on the doorstep to put the Storm up 5-2.

Ottawa showed some good fight in the third, outshooting Guelph 16-3 as Tye Felhaber (15) and Kyle Maksimovich (8) scored to bring the Barber Poles within one with two seconds left on the clock.

The sound of the horn finalized a 5-4 Storm win and a brand new series, one that is down to three games as the Storm have shown their resilience once again.

Anthony Popovich made 30 saves for the win as the Storm handed the 67’s back-to-back losses for just the fourth time this season. The Guelph faithful went home happy with free chicken wings for the second time in as many contests as the Barber Poles surrendered five goals or more in consecutive games for the first time since mid-December.

Ottawa outshot Guelph 34-24, finishing with a strong third period to return home for Game 5 on Friday night with something to hang their hat on.

“We’re a good enough team to play but we’re not good enough just to get by on our talent, we have to work hard,” said 67’s forward Tye Felhaber. “We really only had one good period in this barn and we’re looking to build off of that on Friday.”

“It’s cliche, but we have to take it one at a time,” added 67’s head coach Andre Tourigny. “We have home ice advantage now and we have to make the most of that.”

The 67’s saw the return of defenceman Kevin Bahl to the lineup in Game 4 while goaltender Michael DiPietro remained sidelined with a lower body injury.

Game 5 of the Rogers OHL Championship Series gets underway on Friday at 7:00pm in the nation’s capital.