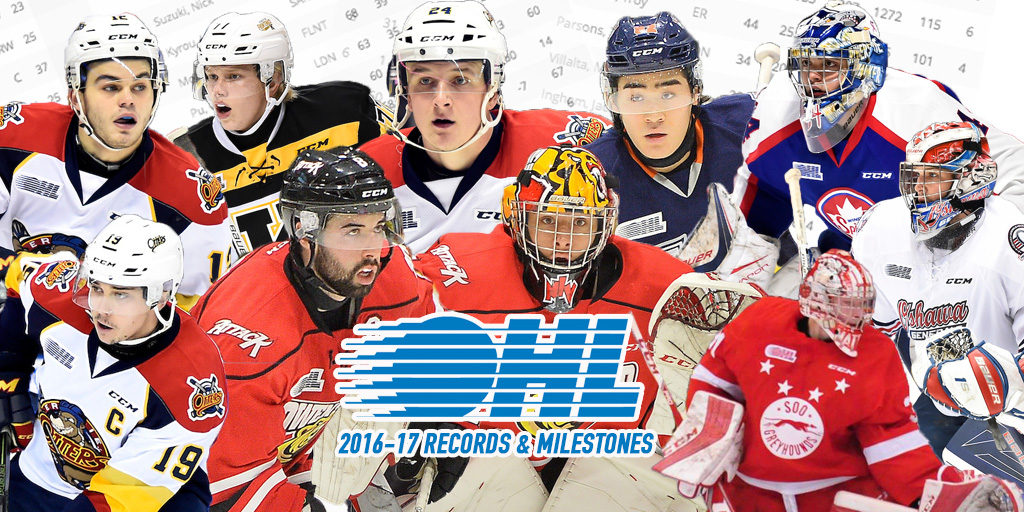 The 2017 OHL Playoffs are well underway and it’s time to take a look back at the season that was.

Several teams will have updates to make in their respective team record books over the summer after a number of new records were set across the league on team and individual levels.

The Erie Otters were in the headlines often throughout the 2016-17 campaign, seemingly setting new records every few weeks. Dylan Strome, Alex DeBrincat and Darren Raddysh all re-wrote franchise records as the Otters made Canadian Hockey League history, earning their second straight Hamilton Spectator Trophy and third consecutive Midwest Division title in the process.

There’s all that and more below! Here’s a look at new benchmarks set during this past season.

Flint Firebirds
– Qualified for the OHL Playoffs for the first time in team history.
– Set a new club record with 11 goals in an 11-2 win in Saginaw on Jan. 10th.

Hamilton Bulldogs
– Qualified for the OHL Playoffs for the first time in team history.

Kingston Frontenacs
– Posted franchise lows in goals for (179) and penalty minutes (629) which were both league-lows.

Peterborough Petes
– First East Division title since 2006.
– Set a new franchise low for penalty minutes in a season with the league’s second-lowest total of 695.

Windsor Spitfires
– Set a new OHL record with an 88.5% penalty kill, besting the prior mark of 88.3% set by the 2005-06 Kitchener Rangers. The league has recorded power play and penalty kill percentages since 1997-98.

Flint Firebirds
– Kole Sherwood tied a Firebirds all-time franchise record with five goals on Jan. 10th in Saginaw. His mark ties Kevin Brown’s five-goal effort with the Detroit Jr. Red Wings in 1993-94. The five goals were part of a seven-point outing for Sherwood.

Kitchener Rangers
– Connor Bunnaman tied a Rangers mark for most power play goals in a game with three on March 11, 2017 vs. Flint.

Mississauga Steelheads
– Michael McLeod set a new Steelheads record with six points (3-3–6) in a 10-1 win over Peterborough on Feb. 24th.

Ottawa 67’s
– Competed in two 14-round, 28-shooter shootouts this season including Jan. 25th vs. Kingston and Feb. 17th in Oshawa. These mark the second-longest shootouts in OHL history.

Owen Sound Attack
– Petrus Palmu set a new franchise record, scoring four seconds into the second period on Sept. 28th vs. Hamilton. Palmu tied an OHL record set in 1989 by London’s Doug Synishin in the process.
– Nick Suzuki tied a franchise record with five assists on Feb. 17th in a 6-1 win at London.

Erie Otters
– Alex DeBrincat captured the OHL scoring title with 127 points including an Otters franchise record 65 goals along with 62 assists in 63 games.
– DeBrincat tied Mike Ricci’s 1988 OHL record with goals in 19-straight games from Jan. 24th to Mar. 10th.
– DeBrincat finished the season tied with Connor McDavid (2014-15) for the longest point streak in franchise history at 27 games spanning Jan. 14th to Mar. 18th.
– Darren Raddysh set a new mark for points by an Otters defenceman on Feb. 26th in Owen Sound. He surpassed Chris Campoli’s 2003-04 mark of 66 points. Raddysh led all OHL defencemen with 81 points (16-65–81) this season.
– Taylor Raddysh reached the 100-point mark on Mar. 5th in Niagara, becoming the sixth player in Otters history to hit triple digits in a single-season.
– Taylor Raddysh’s plus-67 plus/minus rating led all OHL players and is the highest in OHL history since London’s Danny Syvret was plus-70 in 2004-05.
– Troy Timpano began the season with 13 straight victories from Oct. 7th to Nov. 11th, setting a new Otters franchise record for consecutive wins by a goaltender.

Flint Firebirds
– Ryan Moore’s 39 goals are the most by a Firebirds/Whalers player in a full season with the team since Tyler Seguin scored 48 in 2009-10.

Guelph Storm
– Ryan Merkley became the first rookie in franchise history to lead the team in scoring and is the first OHL defenceman since London’s Rick Corriveau in 1987-88 to lead league rookies in scoring.
– Merkley’s 55 points are the most by a Storm 16-year-old since Jeff O’Neill (79 pts.) in 1992-93. He finished one point shy of Kevin Mitchell’s 1997-98 franchise mark for Storm rookie defencemen.

Kingston Frontenacs
– Jeremy Helvig’s sixth shutout on March 3, 2017 vs. Ottawa set a new single-season franchise mark, surpassing Lucas Peressini’s record set in 2014-15.
– Eemeli Rasanen’s 39 points are the most by a Kingston rookie defenceman since 1988-89 when Drake Berehowsky of the Kingston Raiders had 46.
– Linus Nyman’s 26 goals are the most by a Frontenacs rookie since 2008-09 when Ethan Werek scored 32.

London Knights
– Victor Mete (44), Evan Bouchard (44) and Olli Juolevi (42) combined to give the Knights three defencemen with over 40-points in their lineup for the first time since 1989-90 (Rick Corriveau, Steve Boyd, Paul Holden), not including Mitchell Vande Sompel who recorded 53 points, 16 of which came with London.

Mississauga Steelheads
– Owen Tippett tied Alexander Nylander’s 2015-16 single-season Steelheads record of 75 points. His 44 goals are the most in all-time franchise history since Justin Donati (46) of the Toronto St. Michael’s Majors in 2005-06.
– Tippett’s 44 goals set a new Steelheads single-season mark, surpassing Dylan Smoskowitz’ prior benchmark of 33 in 2012-13.

Oshawa Generals
– Medric Mercier’s 21 goals with Oshawa are the most by a Generals defenceman since Jim Baxter (22) in 1998-99.

Oshawa Generals
– Jeremy Brodeur set a new Generals franchise record with his 10th career regular season shutout on Nov. 6th vs. Ottawa. This surpasses the prior mark of nine set by Ken Appleby in 2014-15. Brodeur finished his regular season career with 11 shutouts and the second most wins (70) in Generals history.
– Head coach Bob Jones earned his 100th career OHL win on Feb. 18th in Owen Sound.