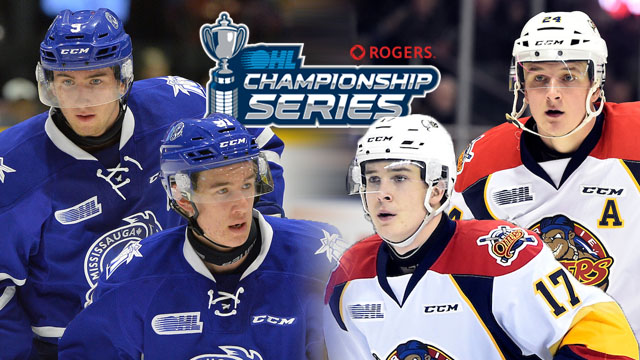 As far as brothers go, these combinations are some of the best the OHL has seen.

On one side, the talented McLeod brothers from Mississauga represent their hometown Steelheads, leading them to an Eastern Conference title and into the Rogers OHL Championship Series.

On the other, the determined Raddysh brothers from Caledon, Ont. look to lead the powerhouse Erie Otters to the promised land – an OHL Championship that has eluded the franchise since 2002.

It’s the second time two sets of brothers have clashed in the OHL Final with the only other incidence happening back in 2012 when the London Knights duo of Matt and Ryan Rupert prevailed over the Niagara IceDogs tandem of Freddie and Dougie Hamilton in five games.

Both Hamilton brothers are in the NHL today, a scenario that could eventually play itself out with either brother combination in this year’s Championship Series.

A first round pick of New Jersey last summer, Michael McLeod is the captain of the Steelheads and leads the club in playoff scoring with 26 points (10-16–26) over 18 games. Younger brother Ryan is considered a top prospect for the 2018 NHL Draft and enters Wednesday’s Game 4 on a seven game point streak.

In Erie, Darren Raddysh recently became the first player in OHL history to be named both the OHL’s Defenceman of the Year and Overage Player of the Year, leading all rearguards with 81 points (16-65–81) in the regular season, a trend that has continued in the playoffs as he leads blueliners with 20 points (8-12–20) in as many games. A prospect of the Tampa Bay Lightning, younger brother Taylor Raddysh represented Canada at the World Juniors this past December and has 28 points (9-19–28) in 20 playoff contests.

One set of brothers will become the fifth combination in OHL history to hoist the J. Ross Robertson Cup.

“It’d be pretty cool to win it together,” said Taylor Raddysh. “It’s not something a lot of siblings get to share and with us being as close as we are it’d be a lot of fun to see him (Darren) be able to do it in his last year.”

Interestingly, all four players are graduates of the Toronto Marlboros program and Michael McLeod and Taylor Raddysh were teammates over the course of six years.

“Yeah we know them and their family pretty well,” said the older McLeod. “We spent a lot of time at the rink together growing up and Ryan was a call-up to play with Taylor and I a fair bit too so it’s interesting to line up against them in a series like this.

“It’d be pretty special to win it with my brother, with us playing on the same line and everything.”

Past brothers to win an OHL Championship include London’s Matt and Ryan Rupert who won consecutive titles in 2012 and 2013, the Knights duo of Corey and Adam Perry in 2005, the Oshawa Generals combination of Brian and Brent Grieve in 1990 and the Windsor Spitfires tandem of Darrin and Darryl Shannon in 1988.

Of those, two sets went on to hoist the Memorial Cup as the Perry’s helped the 2005 London Knights defeat Sidney Crosby and the Rimouski Oceanic in the Mastercard Memorial Cup Final and the Grieve’s won it all with the 1990 Oshawa Generals in Hamilton, defeating the Kitchener Rangers on Bill Armstrong’s double overtime winner.

The Otters carry a 3-1 series lead into Game 5 of the 2017 Rogers OHL Championship Series set for Friday night in Erie.