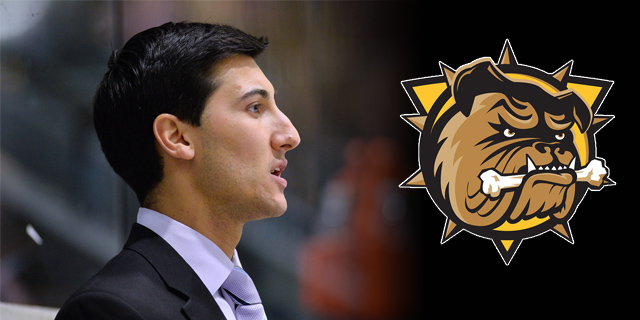 HAMILTON, ONT. – Hamilton Bulldogs President and General Manager Steve Staios announced today that Ron Wilson will be returning in his role as Assistant Coach with the team while the club has hired Vince Laise as an Assistant Coach.

“Vince has an excellent mind for hockey with a proven track record of developing young players both on and off the ice,” stated Bulldogs Head Coach John Gruden. “Ron’s experience and knowledge combined with his commitment to success made it an easy decision to have him return to his role.”

Laise, a native of Brampton, spent the past three seasons as an assistant coach with the Erie Otters of the Ontario Hockey League. Laise has also been an assistant coach with the Oakville Blades (OJHL) and Brampton Bombers (GOJHL). Prior to entering the coaching ranks, Laise spent four years with the University of Maine Black Bears playing in two NCAA Frozen Four Tournaments. After his collegiate career, Laise suited up in two professional games with the Fort Wayne Komets of the IHL. In addition to coaching, Laise has been the lead On-Ice Hockey Skills Coach and Strength and Conditioning Coach for the Athlete Training Centre since 2009.

“We are very pleased to welcome Ron back and add Vince to our organization,” said Staios. “The different experiences, characteristics and skill sets that each member of our coaching staff has will be extremely beneficial to the development of our players.”