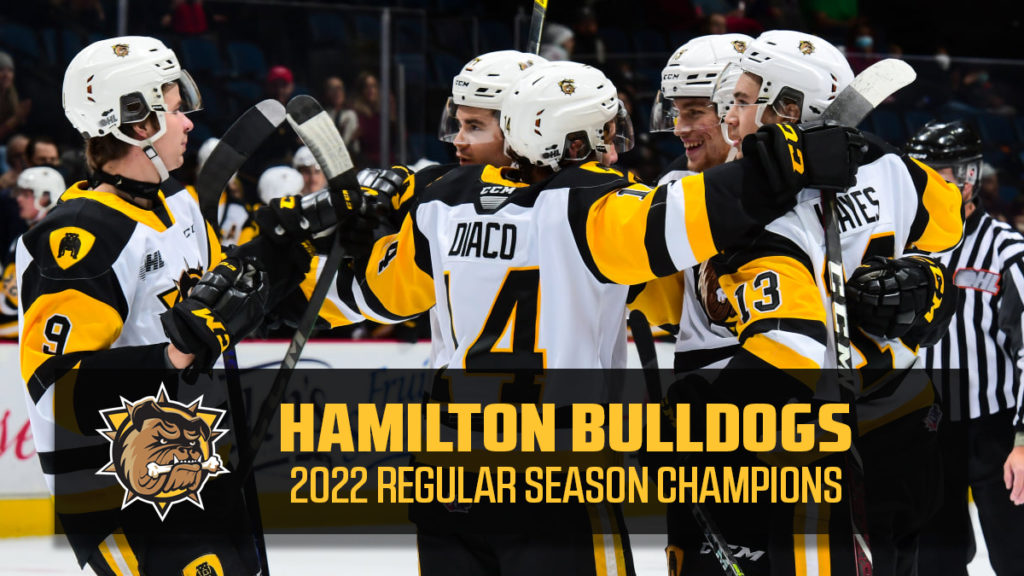 For the first time in the Hamilton Spectator Trophy’s lengthy tenure, it’s coming to the place where it all began.

The Hamilton Bulldogs defeated the Ottawa 67’s 6-0 on Friday in the nation’s capital, effectively securing first place in the OHL regular season standings as their record improved to 47-12-3-2 with 99 points. The Dogs take the torch from the 67’s, who had won back-to-back regular season titles in 2019 and 2020.

The top-ranked team in the Canadian Hockey League this past week,  the Bulldogs have now won six in a row, with Marco Costantini setting a new franchise mark on Friday with his sixth shutout of the season, a new career benchmark for a Bulldogs netminder.

The Hamilton Spectator Trophy was first presented to the Ontario Hockey Association in the 1957-58 season, and this marks the first time a Hamilton team has claimed the trophy. Winners have gone on to capture the OHL championship 24 times and the Memorial Cup 11 times. The 2017 Erie Otters hoisted the Robertson Cup five years ago following their second straight regular season title while the 2009 Windsor Spitfires were the last OHL club to complete the trifecta, emerging as Memorial Cup champions.

Head coach Jay McKee’s club has excelled on special teams with the OHL’s second-ranked power play and fourth-ranked penalty kill, surrendering a league-low 169 goals while scoring the second-highest total of 276.

The Bulldogs are led offensively by Logan Morrison who sits seven points shy of the century mark while the trio of Avery Hayes, George Diaco and Montreal Canadiens prospect Jan Mysak have also been regular contributors. Mid-season additions in Mason McTavish (from Peterborough) and Ryan Winterton (from injury) have boosted the Hamilton attack in front of a dynamic defence corps led by Nathan Staios, Arber Xhekaj, Gavin White and captain Colton Kammerer.

The 2022 East Division champion Bulldogs are chasing their second OHL Championship after hoisting the Robertson Cup in 2018.

They have four games remaining on their regular season schedule, facing Oshawa, Barrie, Niagara and Erie.

For the first time in team history, your Hamilton Bulldogs have clinched the top seed in the Ontario Hockey League! #DawgMentality | #BeTheHammer pic.twitter.com/C3IfvTUmM8