Bulldogs drop close one to Shawinigan 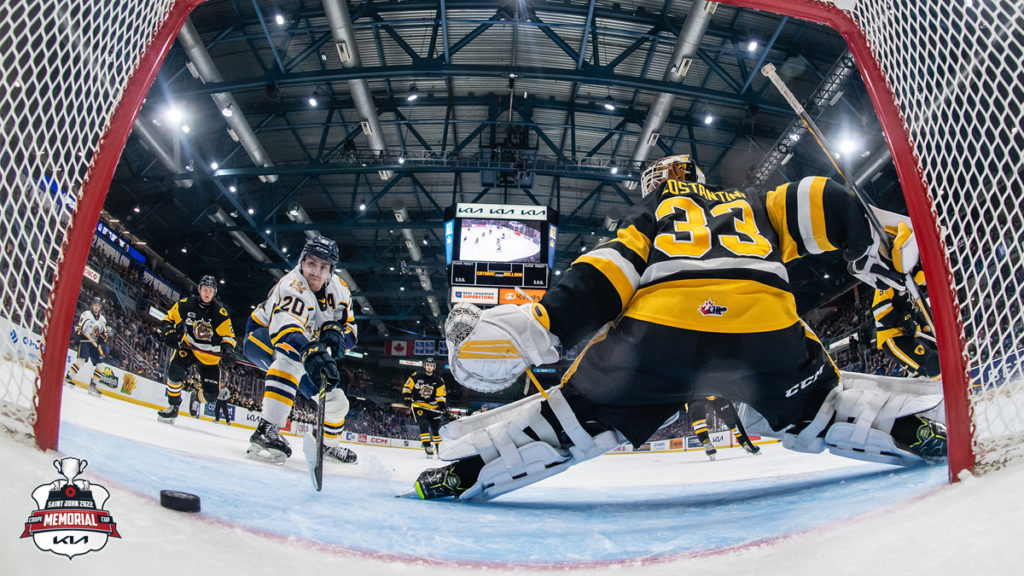 The Shawinigan Cataractes have stayed perfect at the 2022 Memorial Cup presented by Kia, coming away with a 3-2 victory versus the Hamilton Bulldogs on Thursday in the fourth contest of the round-robin schedule.

Trailing early, the Cataractes fell behind at the 5:08 mark of the opening frame when Bulldogs centre and Anaheim Ducks first rounder Mason McTavish cashed in on a 5-on-3 man advantage after drawing a quick pass from overage rearguard Nathan Staios and firing it from the circle to beat Cataractes netminder Antoine Coulombe.

Quickly rallying, the Cataractes responded under two minutes later, first drawing offense from Edmonton Oilers first rounder Xavier Bourgault before fellow first-round pick Mavrik Bourque (Dallas Stars) also capitalized to give his side the 2-1 lead, with both markers coming on the man advantage.

“When you have skill, and you are executing on the powerplay how our guys are right now, it makes for a good percentage,” Cataractes hockey operations assistant and 2000 graduate Pascal Dupuis said postgame. “Nobody believes that we stand a chance and now are 2-0 against great teams.”

Back on the man advantage early in the final frame, this time the Cataractes cashed in courtesy of Buffalo Sabres prospect Olivier Nadeau who completed a pretty passing cycle coming off a faceoff win for Shawinigan.

The Catraractes, despite being outside 34-40, held on for the victory and have now won both of their contests at the 2022 Memorial Cup presented by Kia. For the Bulldogs, while the club remains winless through two appearances, it has a quick chance to reset as the club returns to the ice Friday in a round-robin set coming against the Edmonton Oil Kings.

“I liked our effort tonight. I was proud of the effort the boys left out there,” Bulldogs head coach Jay McKee said postgame. “That is the effort we want from our guys. They started the right way. Our goaltender came up with some big saves in the third, which you need at this level and he gave us a chance to win. But we take nine minors and we are short seven times, including a 5-on-3 against a great powerplay, and we are not going to get the results we want.”

BULLDOGS BITES: Hamilton’s second straight loss marks the first time they’ve dropped two in a row since December 2 and 3 … Ryan Humphrey returned to the Hamilton lineup, picking up an assist … Shawinigan went 3-for-7 on the power play while Hamilton was 1-for-4 … the last time an OHL champion started the Memorial Cup at 0-2 was 2009 in Rimouski when the Windsor Spitfires came back to win the Memorial Cup.