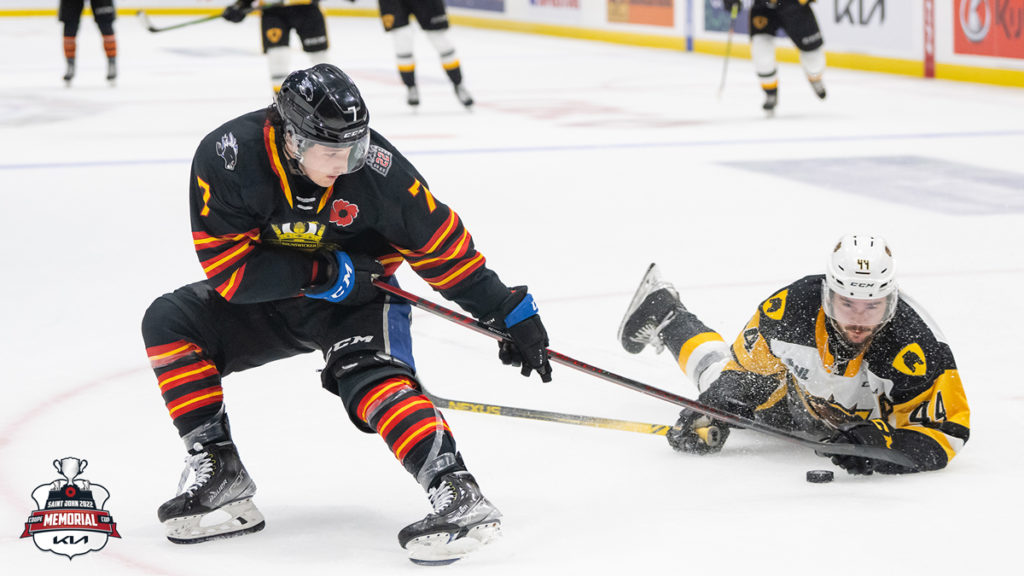 A month of preparation paid off for host Saint John in the round-robin opener of the 2022 Memorial Cup presented by Kia as the Sea Dogs downed the OHL champion Hamilton Bulldogs 5-3 on Monday.

Playing their first game under interim head coach Gardiner MacDougall, the Sea Dogs drew an early start before a raucous crowd when defenceman and Calgary Flames draftee Yan Kuznetsov slipped one by Bulldogs netminder Marco Costantini at the 2:17 mark of the opening frame.

“We couldn’t have scripted it any better than to have scored the first goal,” MacDougall told reporters postgame. “Guys were excited to play. Any time that you are the host, you want to build momentum. You look at the building tonight and it was a great atmosphere.”

Adding one more goal a side to close out the first period, the Bulldogs drew offense from Seattle Kraken prospect Ryan Winterton who cashed in from the slot on the powerplay before the Sea Dogs’ Ryan Francis helped the home side regain the lead.

Not yet finished, the Sea Dogs pulled ahead 3-1 midway through the second after New York Islanders prospect and QMJHL MVP William Dufour drew a behind-the-net pass from Ottawa Senators up-and-comer Philippe Daoust, his second of three assists on the night en route to eventual first-star recognition.

“The support of all the fans gave us a lot of energy. It was amazing out there,” Daoust said. “We came into the game knowing we were going to be fresher. We did a lot of intrasquad games over the last 40 days and were ready to go.”

The Sea Dogs then kept it close as veteran netminder Nikolas Hurtubise made a cross-crease save late in the second period to help his side hold the 3-1 edge, his biggest stop on a night that saw him turn aside 17 shots.

“That was the difference,” MacDougall said. “TSN was here tonight and that was the (Turning Point). It was great for (Hurtubise) as well. He won the QMJHL championship last year, he knows how to win, and tonight he put another notch on his belt. He was outstanding.”

Finding their footing in the third, the Bulldogs outshot the opposition 6-5, first seeing regular-season goal leader Avery Hayes deflect a Logan Morrison shot on the man advantage before Winterton added his second of the night just over six minutes later at 4-on-4.

“We pushed in the third but we couldn’t catch up,” Morrison said. “We got back to playing our game but it was too little, too late.”

Added Bulldogs head coach Jay McKee, “I thought we had a pretty good push in the third. We started to move our feet more and support the puck more.

“We weren’t surprised by (Saint John’s) jump. They have had a lot of time off and they are here at home. They had a great crowd. I am sure they had this game circled on their calendar for a long time. They played a good hockey game, but it is no secret that the Sea Dogs did not see the best version of the Bulldogs today.”

With the Bulldogs pushing, an empty netter cut short the momentum as 19-year-old centre Peter Reynolds’ tally at the 18:48 mark sealed the 5-3 victory.

“It was a team victory and that is what it has to be this time of year. I thought our ‘D’ was outstanding. Our forwards played a two-way game and established the forecheck,” MacDougall added. “We represent Saint John, a blue-collar city and I thought there were a lot of blue-collar plays and efforts tonight.”