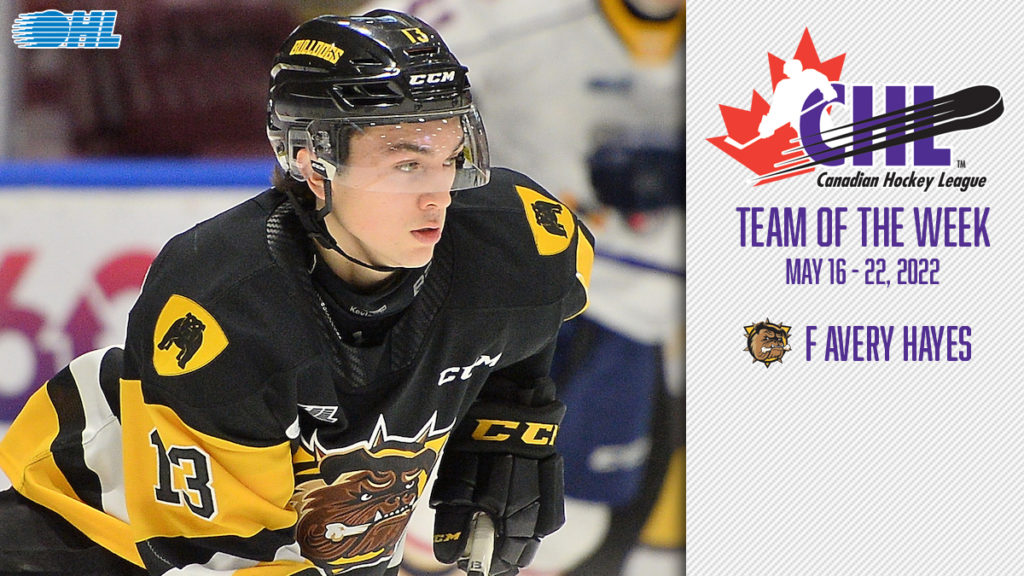 The Canadian Hockey League announced today the 26th edition of the CHL Team of the Week for 2021-22 based on individual performances from May 16-22.

Leading the forward ranks is Hamilton Bulldogs 2002-born right-wing Avery Hayes who through a pair of appearances collected three goals and four assists for seven points highlighted by a four-point performance coming in Friday’s Game 1 win over North Bay. For his efforts, Hayes was named the OHL Player of the Week. In all, the Michigan native stands third in Bulldogs playoff scoring with 16 points in seven games.

Also up front is Seattle Thunderbirds right-wing Reid Schaefer who registered seven points counting three goals and four assists coming in four outings. Among the highlights was Tuesday’s Game 7 victory over Portland in which Schaefer finished with one goal and two assists. Schaefer was later named the WHL Player of the Week in recognition. He now stands second in Thunderbirds scoring with 17 points in 14 appearances. An 18-year-old native of Spruce Grove, Alta., Schaefer ranks 31st among North American skaters per Central Scouting ahead of the 2022 NHL Draft.

Rounding out the forward ranks is Seattle Thunderbirds overage centre Henrik Rybinski who through three outings collected six assists including four helpers coming in Tuesday’s Game 7 win versus Portland. Through the postseason, Rybinski sits fourth in Thunderbirds scoring with 14 points in 13 games. A Vancouver native, Rybinski signed his entry-level contract with the Washington Capitals earlier this season.

On the blue line, Winnipeg ICE rearguard Benjamin Zloty recorded two goals and two assists for four points over two appearances. Among the highlights was a pair of third period goals coming in Friday’s 5-4 final versus Edmonton. A 20-year-old Calgary native, Zloty leads all Winnipeg defencemen with 15 points through 13 appearances.

Also on the back end is Jeremy Hanzel of the Seattle Thunderbirds who notched four points counting two goals and two assists through four outings. In Tuesday’s Game 7 victory over Portland, Hanzel twice found the back of the net and added an assist. A 19-year-old native of Coquitlam, B.C., Hanzel sits second among all Thunderbirds rearguards with eight points across 14 outings.

Between the pipes, Francesco Lapenna of the Charlottetown Islanders impressed in twice finding the win column in which he combined for a .970 save percentage and 1.00 goals-against average. Among the highlights was Thursday’s Game 3 win in Acadie-Bathurst in which Lapenna turned aside 36 shots en route to a 3-1 victory and first-star recognition. A 19-year-old native of Laval, Que., Lapenna remains undefeated through six postseason appearances in which he has notched a .951 save percentage alongside a 1.17 goals-against average.