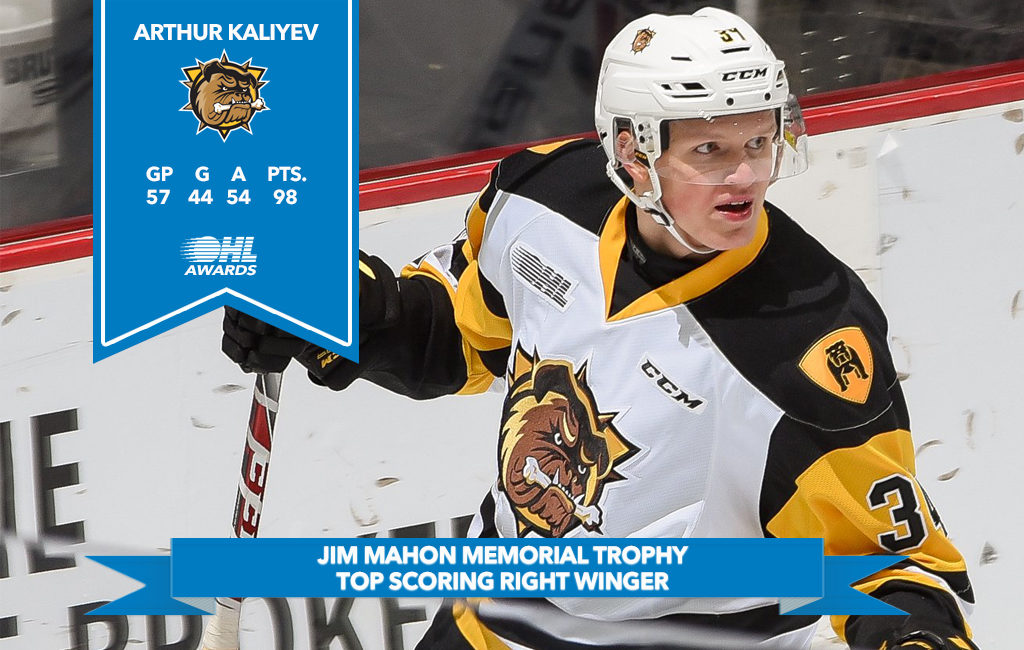 Los Angeles Kings prospect Arthur Kaliyev of the Hamilton Bulldogs finished fifth in OHL scoring but led all right wingers with 98 points including 44 goals and 54 assists in 57 games.

The 18-year-old from Staten Island, NY became the Bulldogs’ all-time leader in both career points (248) and goals (126) this past season, leading the team offensively while setting a new single season club mark for assists with 54.

Kaliyev was the OHL’s Player of the Month for October. His season was highlighted by 29 different multi-point performances including a career-high five-point effort on January 9th in Niagara. The former second round (26th overall) pick of the Bulldogs in the 2017 OHL Priority Selection finished with the League’s second-highest total of 288 shots on goal as he becomes the first Hamilton player in OHL history to earn the award.

Kaliyev, who was a second team all-star in 2018-19 and represented the United States at the 2020 IIHF World Junior Hockey Championship, was a second round (33rd overall) pick by the Los Angeles Kings in the 2019 NHL Draft. He follows in the footsteps of former long-time Kings forward Jim Fox (Ottawa 67’s, 1979-80) as well as recent Kings winger Tyler Toffoli (Ottawa 67’s, 2011-12) in winning the award.

The Jim Mahon Trophy was first presented following the 1971-72 season by the players and management of the Peterborough Petes in memory of their right winger Jim Mahon who was accidentally killed that summer.  Justin Brazeau of the North Bay Battalion was last year’s recipient with 113 points in 68 games scoring 61 goals with 52 assists.  Recent winners also include Jordan Kyrou of the Sarnia Sting in 2018, Alex DeBrincat of the Erie Otters in 2017, Kevin Labanc of the Barrie Colts in 2016, and Mitch Marner of the London Knights in 2015.