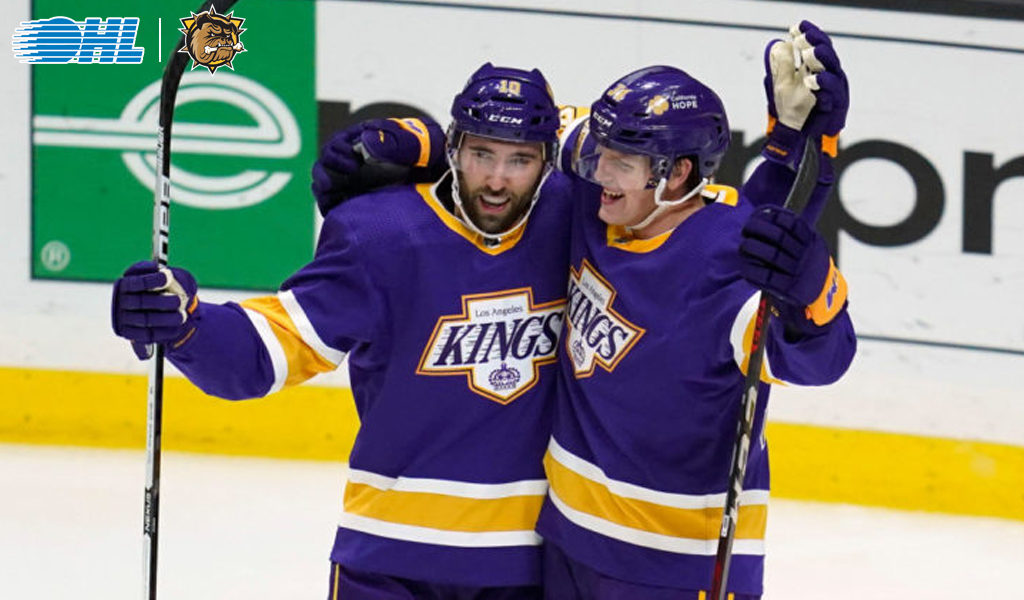 Hamilton Bulldogs superstar Arthur Kaliyev made his NHL debut for the Los Angeles Kings on Tuesday night, in a rivalry matchup with the Anaheim Ducks dubbed “The Freeway Faceoff.”

The Goal
The moment of the night would come at 5:32 of the second period as Guelph Storm graduate Drew Doughty would break down the right-wing feeding North Bay Battalion alumnus Mike Amadio in the right-wing circle. Amadio would take a shot that former Kitchener Rangers netminder John Gibson would stop but as the rebound bounced through the crease Kaliyev would crash the front of the net. Muscling through two Ducks defenders and tossing the puck to the back of the net, Kaliyev recorded his first NHL goal becoming just the 21st Los Angeles Kings player to score in his NHL debut. He’d finish the night with 14:42 of ice time recording the goal, and a blocked shot while being shown confidence from the Kings coaching staff as the sixth attacker in the closing minutes of the game with the Kings looking for an equalizing goal.

“It was a really special moment, getting the first one. You never forget those moments, getting your first goal. I thought it was a pretty good game, a lot of nerves at the start of the game, but I tried to play my best out there and picked up a rebound goal.”

“It was a really special moment.” @Arthur_Kaliyev on his first @NHL goal in his debut ⤵️ pic.twitter.com/YFaZiK16c4

“He’s a young player, he was excited to play and the guys were excited for him and that gave us a little bit of life and a little bit of energy. When a 19-year-old can come in and do that, he’s obviously dangerous when he’s got the puck in and around the net, he had some other chances, more than a lot of our other forwards that played tonight. A good start for him and he’ll learn his way through the league. It’s no different than Gabe [Villardi], it’s a hard league, it’s not going to come easy, that’s part of cutting your teeth.”

Kaliyev continues his roll over the past year, having set the Bulldogs all-time records for goals and points, winning a World Junior Hockey Championship Gold Medal for Team USA and now becoming the eighth Hamilton Bulldogs player to debut in the National Hockey League.

The Hamilton Bulldogs want to congratulate Arthur Kaliyev on his successful NHL debut and look forward to many more goals at the NHL level for “King Arthur.”