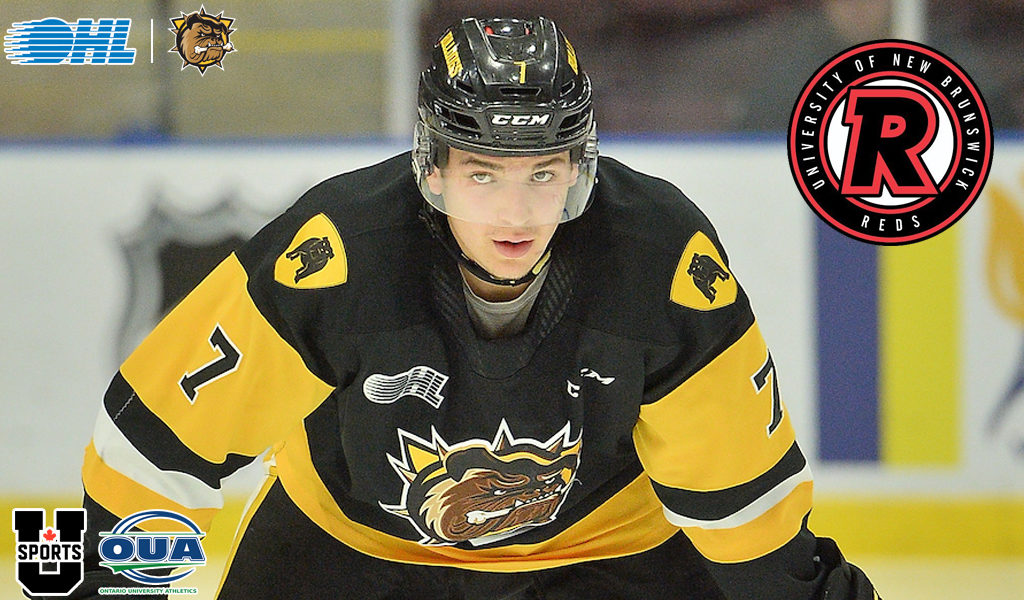 (FREDERICTON, NB) – After a successful four-year major junior career that included an Ontario Hockey League championship, defenceman Kade Landry has signed a U SPORTS Letter of Intent and will join the UNB Reds men’s hockey team ahead of the 2020-21 Atlantic University Sport season.

The native of Wallace, Ontario, spent four full seasons in the OHL with the Barrie Colts and Hamilton Bulldogs.

“I talked to some other great U SPORTS programs, but UNB’s culture and reputation seemed to fit best with my career goals and aspirations,” said Landry.

In 2017, after more than two seasons with the Colts, Landry was traded to Hamilton, and helped the Bulldogs to the 2018 OHL title.

“He has an outstanding work ethic with an exemplary ‘team first’ attitude,” said MacDougall. “He has the necessary attributes of high energy and an infectious personality which should allow him to excel and be a key component of our defensive unit.”

“Talking with Coach MacDougall a number of times helped me understand more about UNB’s excellence in developing players both athletically and academically,” said Landry. “In the end, the opportunity was too inviting to go anywhere else.”

As a member of the Reds defensive corps, Landry will work closely with Reds associate coach Rob Hennigar.

“We love the way Kade skates, and love his ability to distribute the puck in all three zones,” said Hennigar. “His vision and feet are great assets. His compete level, ‘team first’ attitude, and energy are all things we feel makes Kade a great fit for us.”

“In my OHL career, I was lucky enough to be given many roles, which helped me become a two-way defenceman,” said Landry. “I was fortunate to play with world class teammates and quarterback power-plays, and I feel I can be relied upon to defend hard.”

Sad to see Landry, who served as an assistant captain in Hamilton during the 2019-20 season, graduate from the major junior ranks, Bulldogs general manager and former NHLer Steve Staios says the Reds are fortunate to have Landry.

“Kade is not only a great player, but a terrific young man,” he said. “He has continued to develop his game and is only scratching the surface of his full potential. I’d like to thank Kade for his contributions to our organization both on and off the ice.”

A rival OHL general manager described Landry, who has attended training camp with the NHL’s New York Rangers, as “the perfect UNB D-Man.”

Landry is looking forward to his Reds career.

“I hope to play a key role in contributing to UNB’s tradition of success through my commitment to the school and community,” he said. “I’m grateful for this exciting opportunity and can’t wait for the challenge ahead.”

Landry has yet to decide what he’ll be studying while attending UNB.