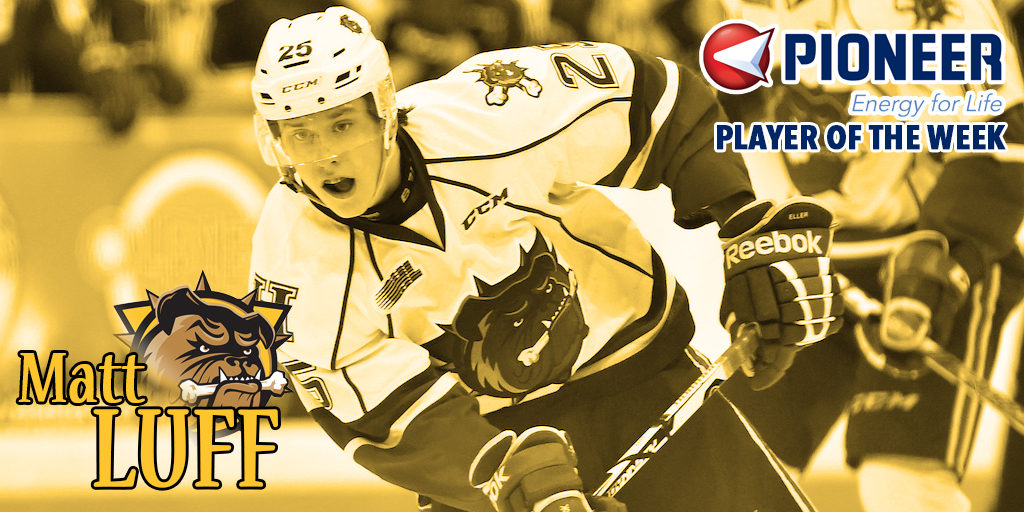 Toronto, ON – The Ontario Hockey League today announced that Los Angeles Kings prospect Matt Luff of the Hamilton Bulldogs is the Pioneer Energy OHL Player of the Week for opening week action ending September 25 scoring six points in two games including four goals and two assists with a plus-minus rating of plus-7.

Luff was the offensive catalyst for the Bulldogs who opened the 2016-17 regular season with a pair of victories over Eastern Conference competition.  On Friday night he matched a career-high with four points including a hat-trick in a 7-0 road win over the Mississauga Steelheads, then Saturday contributed a goal and an assist in the 7-2 victory over the Kingston Frontenacs.  Luff earned first star honours and was credited with game-winning goals in both contests.

A 19-year-old from Oakville, ON, Luff is playing in his third OHL season and was recently signed to an entry-level contract by the Kings after attending training camp as a Free Agent invite.  Last season he set career-highs in all offensive categories with 27 goals and 30 assists for 57 points in 61 games which led the Bulldogs in scoring.

Watch video highlights of Luff and the Bulldogs against the Steelheads and Frontenacs.

Also considered for the award this week were Ryan Moore and Nicholas Caamano of the Flint Firebirds who each recorded seven points in three games.  Moore scored three goals with four assists, while Caamano netted two goals with five helpers as the Firebirds picked up two wins in OHL Opening Week.  In goal, Liam Herbst backstopped the Guelph Storm to a pair of wins against the Saginaw Spirit making 75 saves for a save percentage of .974 along with a goals-against-average of 1.00.