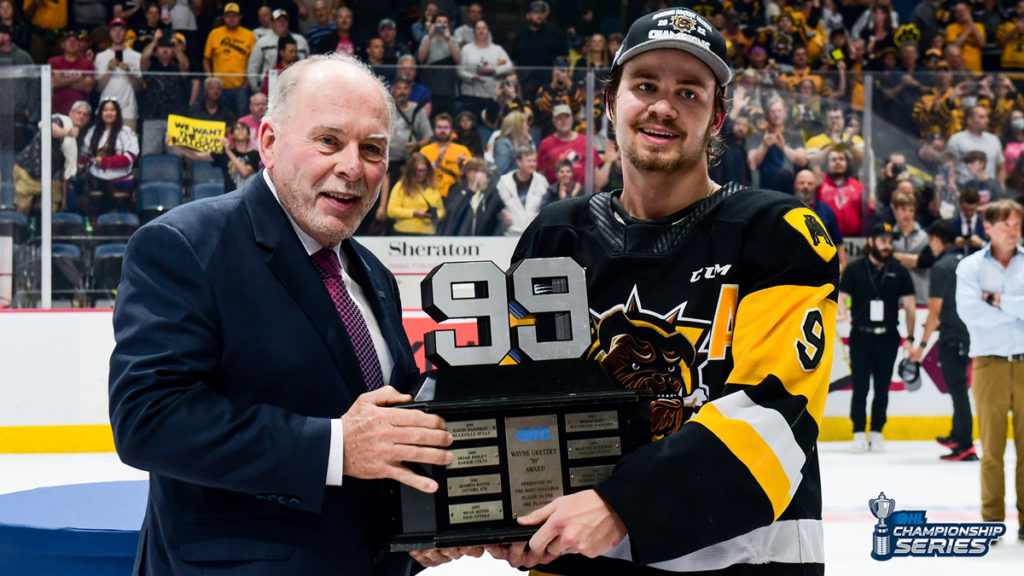 Hamilton Bulldogs forward Logan Morrison has been named the Most Valuable Player of the 2022 OHL Playoffs and is the recipient of the Wayne Gretzky ’99’ Award.

Morrison led the Bulldogs with a new club record 39 points in 19 playoff contests, scoring 17 goals while adding 22 assists in 19 games, posting a plus/minus rating of plus-17. He recorded 13 points (4-9–13) in seven OHL Championship Series matchups, including a pair of assists in Game 7. He joins Robert Thomas (2018) as the second Bulldogs player to earn the award.

“It’s the best feeling ever to win with this group of guys,” said Morrison following Hamilton’s 6-1 victory in Game 7. “Winning the Wayne Gretzky 99 Award is obviously special but it doesn’t mean as much as the Cup there. It’s very special to get this acknowledgement but at the same time I’m way happier with the team award.”

Morrison put up points in all 19 of his postseason outings, joining Matt Beleskey of the 2008 Belleville Bulls with the longest OHL playoff point streak in the last 25 years. The 19-year-old from Guelph, Ont. became the second Bulldogs player to ever record 100 points in a season in 2021-22, scoring 34 goals while recording a new franchise record 66 assists in 60 games.

The OHL introduced the Wayne Gretzky 99 Award in 1999 to honour the Most Valuable Player in the OHL Playoffs as selected by the media. Gretzky, a native of Brantford, graduated from the Sault Ste. Marie Greyhounds to become the most prolific scorer in the history of the NHL.  The league created the award in tribute of ‘The Great One’ shortly after he announced his retirement from the NHL in 1999.