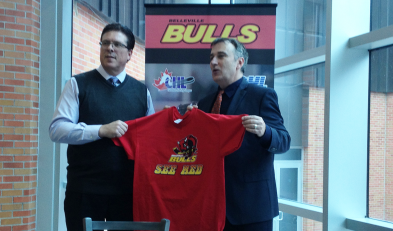 BELLEVILLE, ON – The Belleville Bulls and the City of Belleville have signed a lease extension that allows the hockey club to continue to play at Yardmen Arena through May 2015. The agreement includes a club option to allow further but limited extensions.

“This agreement is the result of important conversation between our club and the city council. Together, we have considered the realities of building a viable OHL franchise in one of the Ontario Hockey League’s smaller markets,“ commented Gord Simmonds, majority owner and Governor of the Belleville Bulls. “As we approach the ten-year milestone of our present ownership, it is appropriate to assess our future and determine whether our goal of building an OHL franchise in this market is viable. We are pleased with the understanding we have reached with the city. It underscores our mutual belief that keeping the Belleville Bulls in this community is a goal worth striving for. From the start in 2004 we have reminded everyone that this will work if we can gain true commitment from the key stakeholders; owners, city council, sponsors, and fans.”

“The Belleville Bulls are an integral part of the culture and history of our community and we are happy to sign this agreement that will ensure that they continue to play at the Yardmen Arena for the immediate future,” said Mayor Neil Ellis. “The Bulls bring national and regional exposure to our community year round and are one of the most identifiable assets in our municipality. We look forward to working with the Bulls during this lease to create a viable long-term plan that will keep the team right here in Belleville.”

“It is apparent that our viability hinges on our ability to attract fans to a new level of commitment to the Belleville Bulls Hockey Club. We have just witnessed a tremendous display of energy and effort in the community of North Bay where hockey fans and city leaders clearly decided they wanted to regain an OHL club,” noted Simmonds. “We have an opportunity to see a similar show of enthusiasm in a community that wants to retain the OHL club it already has. We are optimistic that initiatives being unveiled in our 2013-14 ticket drive, along with our team’s exciting season, will inspire more hockey fans across the community and entire region to become committed to our future here”.