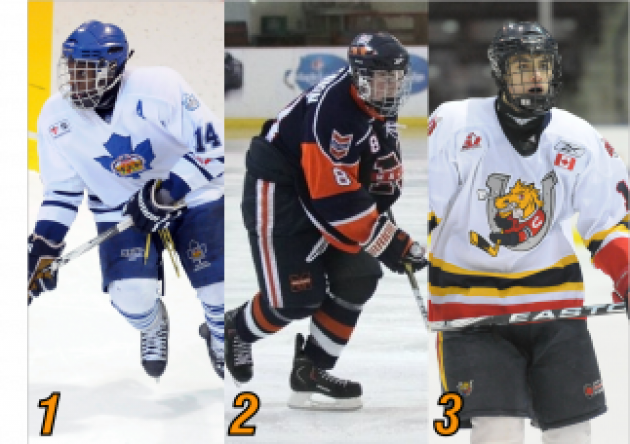 BELLEVILLE, ON – Belleville Bulls General Manager and Head Coach George Burnett announced Thursday that the team has come to terms with it’s first, second and third round selections from the 2011 OHL Priority Selection.

“We’re extremely happy to have these guys on board here,” said Burnett following the announcement. “All three of them are highly skilled, confident, athletic young players.”

Subban, a native of Rexdale will follow in the footsteps of older brothers P.K. and Malcolm to suit up in the Bulls black and gold. The 16 year-old defenceman skated with the OHL Cup Champion Toronto Marlboros Minor Midgets in 2010, providing a dangerous offensive presence off the blueline. In 68 games, the swift skating Subban put forth 21 goals and 43 assists for 64 points. Subban was the fifth overall selection to Belleville in the first round of the 2011 draft.

Also signing, Mack Lemmon is a crash and bang winger who spent last season with the Markham Majors Minor Midgets. A physical winger with a scoring touch, Lemmon had 29 goals, 20 assists and 105 penalty minutes in 58 games with the Majors. The Bulls selected Lemmon with the 23rd overall selection in the draft, making him the first pick of the second round.

Alex Carnevale was the Bulls third round pick from the Barrie Colts Minor Midgets. The younger brother of Ottawa 67’s power forward Jon Carnevale brings speed and intensity to the ice, and has proven to Bulls brass that he’s prepared for the OHL. In 41 games with a very skilled Barrie team, Carnevale had 13 goals, 24 assists and 37 points. A native of Beaverton, Carnevale rounds out a trio of exciting young Bulls prospects to sign with the club.

“We as a management team feel very good about our 2011 draft, and these three players were all guys we had targeted very early,” added Burnett. “We’re excited to see them at camp later this month.”