Bulls’ Simmonds is Humanitarian of Year 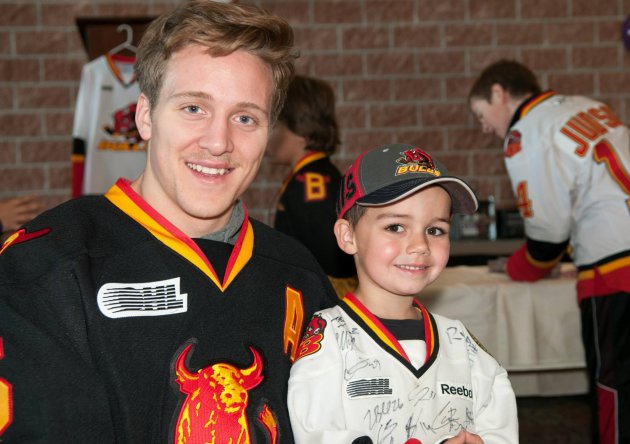 Toronto, ON – The Ontario Hockey League today announced that forward Scott Simmonds of the Belleville Bulls is the 2013-14 recipient of the Dan Snyder Memorial Trophy awarded annually to the OHL’s Humanitarian of the Year.

Simmonds, a 20-year-old from Uxbridge, ON, has been an inspiration to kids and adults throughout the Quinte region over his four-years with the Bulls with a consistent presence at a wide range of community events including over 25 appearances this season at various school and retirement home visits, charity events, animal wellness initiatives, and skating sessions with special needs participants.

“It’s a tremendous honour to be mentioned in the same sentence as a player with the integrity of Dan Snyder,” Simmonds said. “Like Dan, I’ve had the privilege of playing in one of the league’s smaller markets where it’s easy to make new friendships with fans you get to see at and away from the rink on a regular basis. I can’t thank the OHL, the Bulls organization and fans across the Quinte region enough for the great experiences and friendships I’ve had over the past four years.”

A two-time nominee for this award, Simmonds played a prominent role in the club’s annual ‘Bowling with the Bulls’ event this season that raised over $10,000 for the Ontario Lung Association, and ‘Breakfast with the Bulls’ that raised $4,700 for the Quinte Children’s Foundation.  In addition to his leadership with other fundraising initiatives such as ‘Pucks for Paws’ for Hillcrest Animal Hospital, and food collection at the local Santa Claus Parade, Simmonds quietly went out of his way to make a difference in the lives of Bulls fans young and old.  At a community skate in association with Pathways to Independence, a community agency that assists with individuals with acquired brain injuries, Simmonds showed patience and compassion helping a young lady skate for the very first time.  Furthermore, Simmonds used his Bulls’ Pro Shop gift card that all players received as a Christmas gift from the team to purchase a pair of Bulls gloves as a gift for a young fan that he had befriended.

“Scott has always been the first guy to volunteer for community functions and is an engaging personality with the fans,” said Bulls’ General Manager and Head Coach George Burnett. “He has represented our hockey club well over the past four seasons and made significant contributions to the community as a veteran and leader with the team. He takes a lot of pride in being a Bull and has never looked for recognition despite his strong contributions.”

On the ice, the Bulls’ alternate captain collected a career-high 30 points in 63 games scoring 10 goals and 20 assists.  The overage forward was a finalist for the league’s Ryobi Hardest Working Player of the Year award, and received the Bulls’ 2014 Jake Gilmour Award voted by the fans as the Bulls’ player who embodies hard work, discipline, and character on and off the ice.

Simmonds becomes the fifth member of the Bulls to receive the Dan Snyder Memorial Trophy following Andrew Gibbons (2006-07), Michael Mole (2002-03), David Silverstone (2001-02), and Craig Mills (1995-96).  Previous recipients include Chris Terry and Ryan Hayes who represented the Plymouth Whalers with back-to-back awards in 2009 and 2010 respectively, before Jack Walchessen and repeat nominee Andrew D’Agostini of the Peterborough Petes won in 2011 and 2012.  Nominated for a fourth straight time this season, Ben Fanelli of the Kitchener Rangers was last year’s recipient.

Simmonds will be the OHL’s nominee for Humanitarian of the Year at the annual CHL Awards on May 24 and will be formally presented with the Dan Snyder Memorial Trophy at the OHL Awards Ceremony which takes place June 3 at the Hockey Hall of Fame in Toronto.