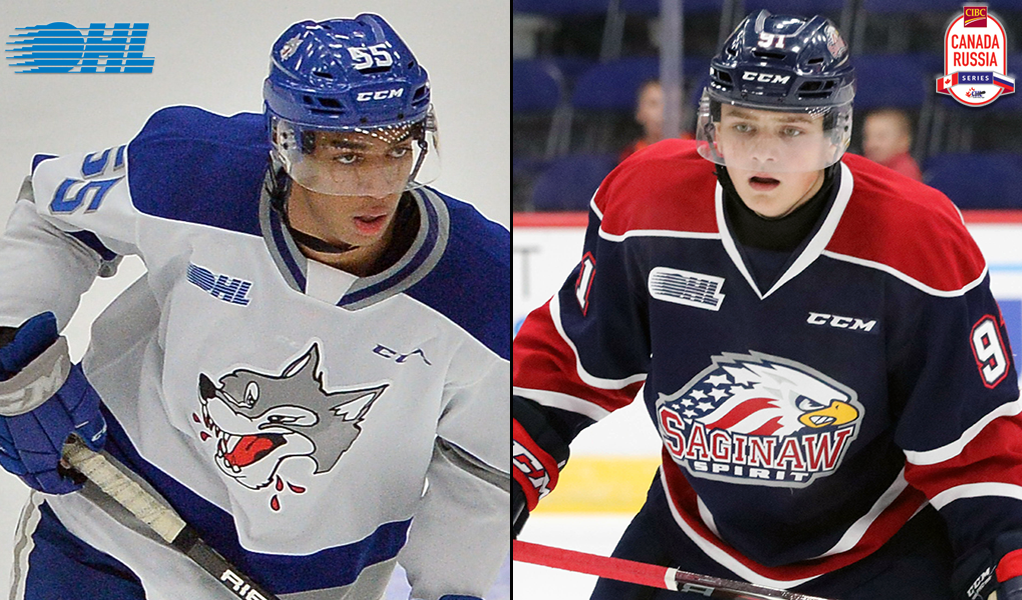 A dynamic duo will lead the way for Team OHL at the 2019 CIBC Canada Russia Series.

Playing before crowds in Kitchener and London, Team OHL enters the annual tournament with an all-time record of 25-6-0-1, including last year’s 1-1 showing. The squad will offer a refreshed look from a year ago, returning only 11 players who competed in 2018, a group that includes goaltenders Hunter Jones of the Peterborough Petes and Jordan Kooy of the Sarnia Sting.

Up front, Team OHL offers an exciting combination in Sudbury Wolves centre Quinton Byfield, whose 31 points counting 11 goals and 20 assists sit tied for top spot in OHL scoring, and Saginaw Spirit sniper Cole Perfetti, who alongside Byfield put his heroics on display on the international stage this summer when he led Team Canada in scoring at the 2019 Hlinka Gretzky Cup, counting an incredible five-goal game with three shootout markers that powered the Great White North past Sweden in semi-final action.

The two talents entered the new campaign as projected first-round selections in the coming NHL Draft in Montreal. Now teammates under the national spotlight, it was only last season when the two up-and-comers battled for top freshman honours in the OHL, with Perfetti ultimately coming out on top with 74 points to lead all rookies.

“Byfield and Perfetti are really good 2002s. They are legitimate guys who will compete for a spot at (world junior) camp,” said Hockey Canada head scout Brad McEwen, who works in collaboration with the Canadian Hockey League to select the final rosters. “We had (Byfield) at the Hlinka and he was a good player for us there and he has just continued his season right from the Hlinka. It will be really interesting to see how he does against the Russians. The Russians have brought really good teams the last two years. They play hard, they play heavy, and it’s going to be good to see how (Byfield) does.

“Then you have Liam Foudy, Aidan Dudas, Akil Thomas, and Serron Noel who have been through the national program. We’re excited to get them in, see where they may fit, and how close they are to being a national team guy.”

On the back end, Team OHL counts another ‘Grade A’ draft eligible in Erie Otters blue-liner Jamie Drysdale, whose sophomore campaign has seen him impress with 19 points counting five goals and 14 assists across 14 games, including a five-point night that tied a single-game franchise high for points by a defenceman.

“You look for skaters and guys who can play with some pace, especially now,” McEwen added. “(Drysdale) is certainly a guy who can handle that.”

Among the 11 returnees, Team OHL will bring five rearguards who competed in last year’s event, including London defenceman and San Jose Sharks first-round pick Ryan Merkley, one of three Knights on the roster in addition to head coach Dale Hunter who will be behind the bench for all six contests. That unique opportunity will offer Hunter, who will also guide Team Canada at the 2020 IIHF World Junior Hockey Championship, an up-close evaluation of the many players aiming for spots on the national stage.

“It’s a bonus. We appreciate the leagues and the CHL allowing Dale to be on the coaching staff of all six games,” McEwen detailed. “I think it’s a real critical piece in the evaluation. At the end of the day, Dale is putting the guys on the ice and the more opportunity that he has to interact with the kids and to get a feel for what they can bring is certainly tremendous long term for our team at Christmas time.”