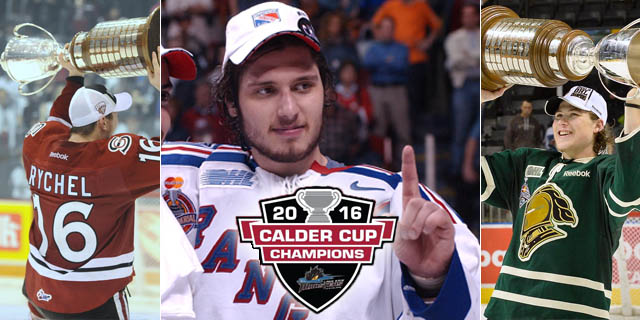 The city of Cleveland is celebrating it’s first championship since 1964 this week after the Lake Erie Monsters skated to their first Calder Cup title in franchise history, completing a sweep of the Hershey Bears with a 1-0 overtime win on Saturday.

Not since the AHL’s Cleveland Barons and NFL’s Cleveland Browns both claimed championships in 1964 has the city on the southern shores of Lake Erie celebrated like it did on Saturday in front of an Ohio state professional hockey record of 19,665 fans.

Six OHL graduates played a part in the championship run that saw the Monsters eliminate Rockford, Grand Rapids, Ontario and Hershey to win the AHL Championship in their first year as the top affiliate of the Columbus Blue Jackets.

Of the six graduates, four won championships during their time in the Ontario Hockey League, providing them with a foundation for the memorable playoff run they were a part of these past two months.

“This is unreal. We worked so hard for this [championship] this season,” Kerby Rychel told the Cleveland Plain Dealer’s Branson Wright. Rychel was an OHL Champion with the Guelph Storm in 2014.

“We got contributions from everyone,” he continued. “This is such a good feeling and we’re so lucky to do this in front of our fans. We have a lot of good young players on this team and hopefully this can all translate to the next level.”

Anderson won back-to-back OHL titles with the Knights in 2012 and 2013 and was able to return to the lineup for Game 4 after missing time with an upper body injury.

The Blue Jackets’ fourth round pick in 2012 saw 12 games of NHL action this past season and was thrilled to be back in the lineup.

“It was hard watching the boys from the stands and you want to get healthy as fast as you can,” Anderson said. “The doctors did a great job of getting me healthy and winning is a great feeling. We had four unbelievable lines, six great defencemen and two of the best goalies in the league. We deserved this for sure.”

Anderson and Broadhurst each had 12 points in the playoffs, both assisting on the overtime winner in Game 6 of the second round to push the Monsters past the Grand Rapids Griffins. Broadhurst was also an OHL champion with the Knights in 2013.

Veteran journeyman Steve Eminger, a former OHL champion who hoisted the Memorial Cup with the Kitchener Rangers in 2003 added another championship to his resume.

The 32-year-old former first round NHL pick in 2002 recorded a goal and seven assists over 13 games with a plus/minus rating of plus-10.

Other OHL grads in Nick Moutrey (North Bay Battalion) and Sonny Milano (Plymouth Whalers) were a part of Lake Erie’s playoff run, helping to bring Cleveland its 10th ever AHL title and first in 52 years.

Recent OHL graduates and Blue Jackets prospects in Jordan Maletta (Niagara IceDogs), Blake Siebenaler (Niagara IceDogs) and Justin Scott (Barrie Colts) were playoff call-ups by Lake Erie.  Despite no in-game action, they got to see first-hand what it takes to win a championship in the professional ranks as they take the next step in their young careers.

The party rages on in the Rock and Roll City as the Monsters celebrate their Calder Cup championship with fans on Tuesday.