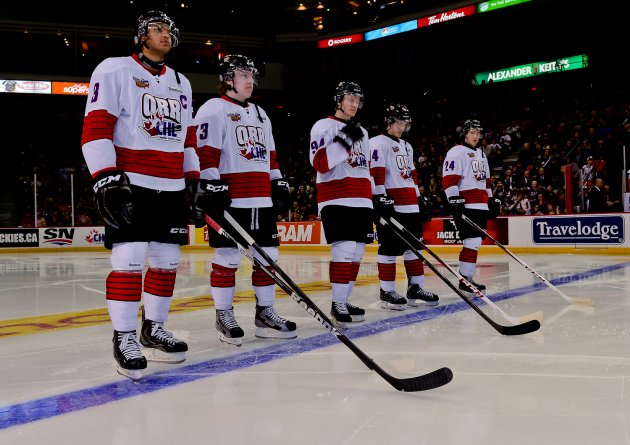 Toronto, ON – The Canadian Hockey League in association with the Western Hockey League and the Calgary Hitmen Hockey Club, today announced that the 2014 CHL/NHL Top Prospects Game will be hosted by the Hitmen on Wednesday, January 15, 2014.

“The Canadian Hockey League is very excited to return to Calgary for the 2014 CHL/NHL Top Prospects Game following successful events in 1999 and 2001,” said CHL President David Branch.  “The passionate hockey fans in Western Canada have contributed significantly to the growth of this prestigious event and we look forward to another showcase of the league’s next wave of star NHL talent in Calgary next January.”

“The Calgary Hitmen organization is both pleased and honoured to host the best and brightest CHL stars and prospects at the CHL/NHL Top Prospects game,” commented Calgary Hitmen President and Governor Ken King.  “On the heels of the 2012 World Junior Hockey Championship that was a terrific success in Alberta, this provides another opportunity to showcase and grow major junior hockey in our great city and province.”

The Hitmen have been represented in this event by a CHL-high 24 players since 1996 including goaltender Chris Driedger who competed in Kelowna before becoming a third round selection of the Ottawa Senators in the 2012 NHL Draft.  Seven former Hitmen also competed in this event before becoming first round NHL picks including Pavel Brendl and Kris Beech in 1999, Brent Krahn (2000), Ryan Getzlaf (2003), Andrew Ladd and Jeff Shultz in 2004, Alex Plante (2007), and Karl Alzner (2007).

Since the event was first introduced in 1996 the game has featured 10 players that were selected with the first overall pick in the NHL Draft including Chris Phillips, Joe Thornton, Vincent Lecavalier, Rick Nash, Marc-Andre Fleury, Patrick Kane, Steven Stamkos, John Tavares, Taylor Hall, and Ryan Nugent-Hopkins.

Associate sponsors for the event include Bank of Montreal, Subway, and Old Dutch.  The game will be broadcast nationally by Sportsnet and TVA Sports.