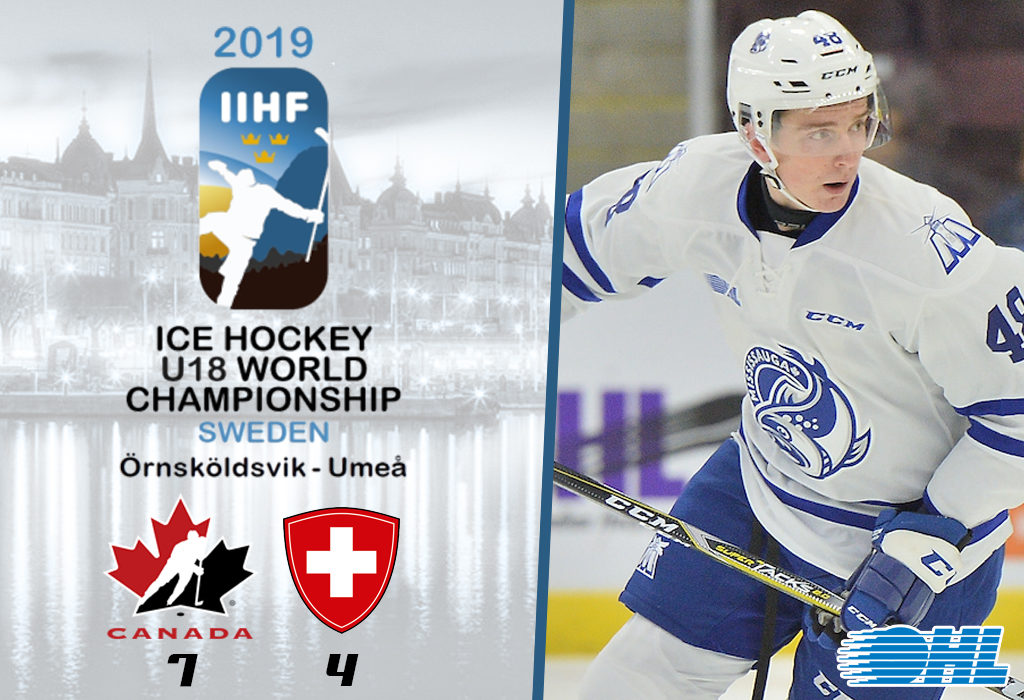 UMEA, Sweden – Canada overcame a 3-0 deficit to defeat Finland on Thursday, but squandered a three-goal lead of its own against Switzerland on Friday. A late second period marker from Peyton Krebs (Winnipeg ICE) put Canada back in front for good though as Brayden Tracey (Moose Jaw Warriors), Dylan Cozens (Lethbridge Hurricanes) and Dylan Holloway tacked on third period goals in a 7-4 victory.

Connor Zary (Kamloops Blazers), Tracey and Thomas Harley (Mississauga Steelheads) put Canada up 3-0 after one before the Swiss came out for the second and responded with a pair of goals from Elvis Schlaepfer. Denys Rubanik knotted things at three with 4:58 remaining in the period.

“We got up pretty quick, and then we thought it was just going to be an easy win for us,” Cozens told IIHF.com. “But they battled back really hard and they played a really good game against us. We know that going forward, no game’s going to be easy and every team is going to battle hard.”

Krebs’ go-ahead goal came with 1:37 to spare in the second as he tipped home a Jamie Drysdale (Erie Otters) point shot before Tracey scored his second of the contest 5:38 into the third on the power play for the game winner.

“I think it was a little wake-up call for us in the second period there,” noted Krebs. “But I know the character in our room. Our coaching staff leaned on us to get it back. We rallied as a group and came back nicely.”

The victory marks Canada’s tenth win in 11 meetings with Switzerland. They get a day off on Saturday before returning to action against Belarus on Sunday.

OTHER WU18 SCORES FROM FRIDAY: