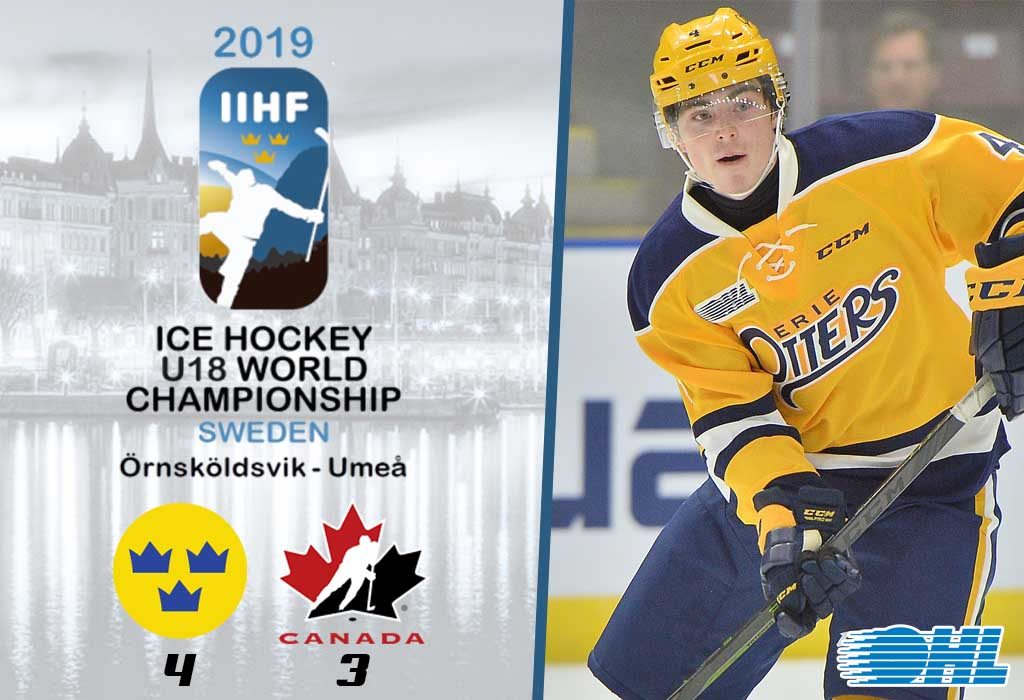 ORNSKOLDSVIK, Sweden – Albin Grewe scored the game winner with 2:31 remaining in the third period to give host Sweden a 4-3 victory over Canada in a back-and-forth semi-final affair.

The two teams exchanged leads throughout the evenly matched contest but Sweden remained one step ahead, returning to the Gold Medal matchup for the first time since 2016.

“It’s a tough one,” said Canada forward Jamieson Rees (Sarnia Sting). “I think we played a hard game, we just got caught in penalty trouble and that cost us at the end. We gave it our best effort. We have tomorrow to look forward to. Bronze medal games are always hard to get ready for, but it’s still a big one for us, especially against the U.S.”

Swedish defenceman Philip Broberg got his team on the board 11:47 into the first period before Connor Zary (Kamloops Blazers) responded under five minutes later.

Alex Newhook put Canada in front 1:27 into the second frame but Sweden would battle back, getting a goal from Alexander Holtz with 6:05 left on the second period clock.

Holtz struck again midway through the third but Zary provided an answer, scoring his second of the contest with assists from Ryan Suzuki (Barrie Colts) and Rees just over three minutes later.

Grewe’s game winner came with helpers from Oscar Bjerselius and Simon Holmstrom as Canada wasn’t able to tie the score in the game’s dying moments.

“This game is cruel sometimes and the effort does not match the result you were looking for,” said Canada head coach Brett Gibson (Queen’s University). “We could not use our depth to our advantage, due to the number of penalties we took, and it cost us. We will get up and prepare to play a talented American team with an opportunity to bring home a medal for our country – that has to motivate us.”

Canada outshot Sweden 34-30 despite taking 14 penalty minutes to Sweden’s four. Taylor Gauthier (Prince George Cougars) made 26 saves in the loss as Canada will get back down to business on Sunday morning, looking to bring home its first medal at the annual event since 2015.

Sweden advances to face Russia for gold on Sunday, seeking its first-ever finish atop the event podium.

OTHER WU18 SCORES FROM SATURDAY: