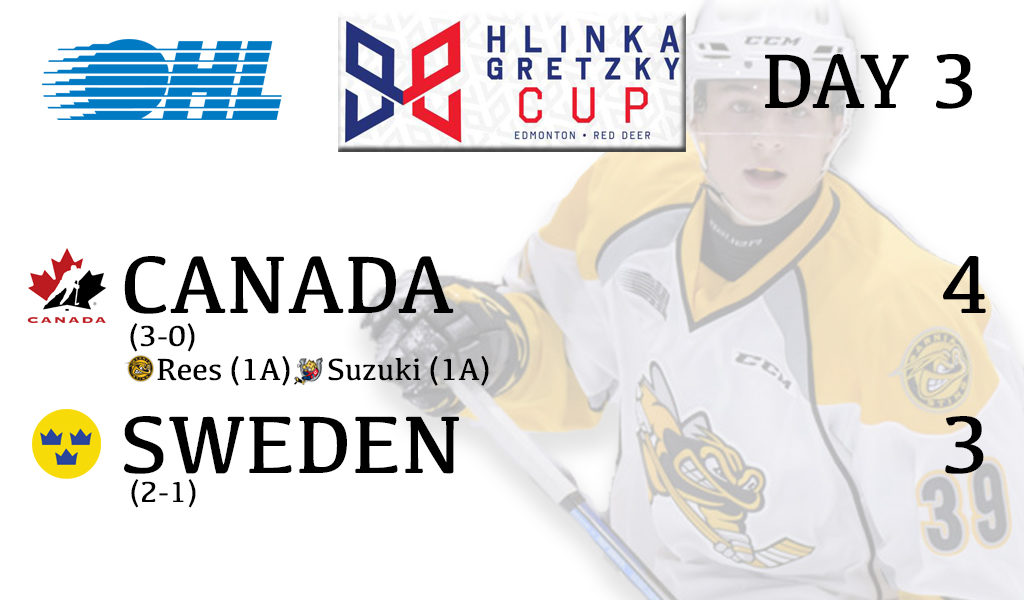 Edmonton, Alta. – Bowen Byram (Vancouver Giants) ripped a power play point blast into the back of the net with 2:26 remaining in the third period to push Canada past Sweden 4-3 at Rogers Place. The win gives Canada a perfect 3-0 record to conclude round robin play.

Lucas Raymond and Josh Williams (Medicine Hat Tigers) exchanged first period goals before Canada had to kill off three consecutive penalties to start the second. Feeding off that momentum, reigning CHL Rookie of the Year Alexis Lafrenière (Rimouski Oceanic) put Canada in the lead 2-1 with 7:09 left in the second.

The Swedes drew even on a goal from Alexander Holtz 7:58 into the third frame but blueliner Matthew Robertson (Edmonton Oil Kings) connected with Williams and Jamieson Rees (Sarnia Sting) just under six minutes later as Canada climbed back in front 3-2.

Sweden’s Elmer Soderblom knotted the score back up at three with 4:16 left in the third, setting the stage for Dach to camp out in the slot and tip home a Byram one-timer under two minutes later at 17:34.

Nolan Maier (Saskatoon Blades) earned his second win of the tournament with an 18-save performance as Canada handed Sweden its first loss, outshooting them 35-21.

“I really liked the way we played five-on-five,” said Canada head coach André Tourigny (Ottawa 67’s) of his team’s performance. “Obviously we could have been a little bit more disciplined and had better puck management sometimes. We’ll never be perfect, no team is ever perfect. I like the way we played and we played a really good team tonight.”

Lafreniére’s goal and an assist gives him six points to pull him into a tie for the tournament scoring lead through three games. Canadian blueliner Justin Barron (Halifax Mooseheads) is tied for the tournament lead in assists with five.

Canada places first in Group A and prepares for semi-final action against the United States (2-1) set to take place on Friday night at 7:00pm MT/9:00pm ET at Rogers Place in Edmonton.