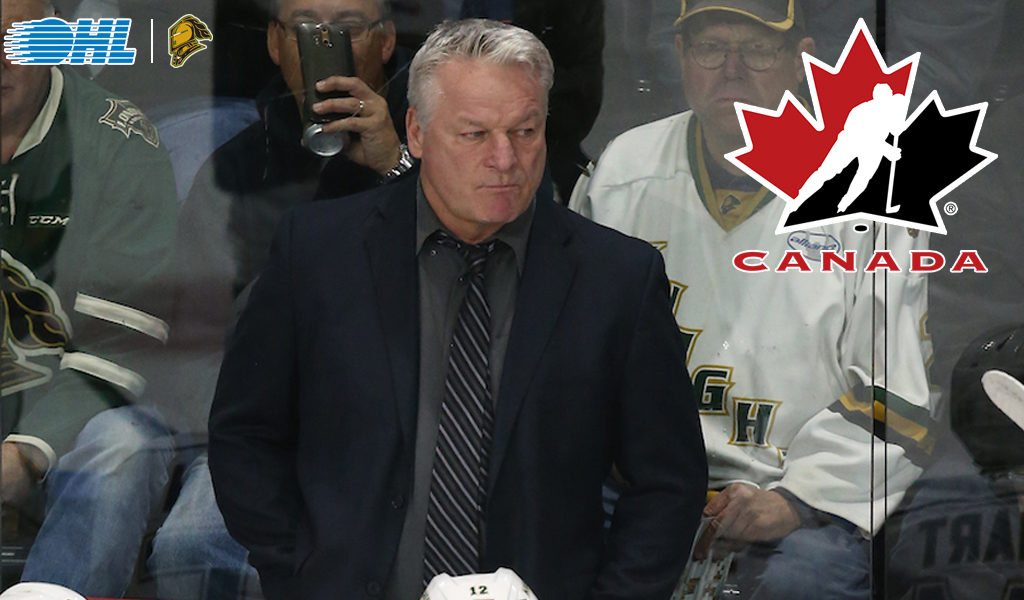 In hopes of returning to its winning ways, Team Canada has turned to one of junior hockey’s most successful bench bosses in longtime London Knights head coach Dale Hunter to lead its next rendition at the 2020 IIHF World Junior Hockey Championship.

Upon retiring from his 19-year NHL playing career in 1999, Hunter returned to his junior hockey roots the following year when he and his brother in Knights general manager Mark Hunter purchased the Ontario Hockey League’s London Knights. After a series of disappointing seasons, the new ownership group transformed the team into a model franchise on and off the ice, with a track record that today counts 19 consecutive playoff appearances, nine Midwest Division titles, four J. Ross Robertson Cup wins, and two Memorial Cup championships including the 2005 team voted CHL Team of the Century.

Combined, Hunter has compiled an incredible 777-311-21-73 showing, good for a .697 point percentage. For his efforts, Hunter has been presented on three occasions with the Matt Leyden Trophy as the OHL Coach of the Year (2004, 2005, 2010), while the earliest year also saw him claim CHL-wide recognition with the Brian Kilrea Coach of the Year Award.

Given such a record of accomplishment, there is confidence Hunter will deliver his success to the national stage, where following five consecutive gold medals from 2005 to 2009, Canada has secured first place just twice in the past 10 years, with the most recent coming in 2018 only to be followed up by missing out on a medal in the next year’s edition.

Fortunately, Hunter has shown his winning ways in the past when representing the Red and White, as evidenced by his gold medal win with Team Canada at the 2013 Ivan Hlinka Memorial Tournament where the Great White North placed first in the Group A preliminaries before shutting out Team USA by a 4-0 score in the championship game.

Dale Hunter has been named the Head Coach for Team Canada at the 2020 IIHF World Junior Championship!

Six years later, the 59-year-old native of Petrolia, Ont., is excited for the opportunity to return to the national stage.

“It’s a great honour,” Hunter told the Canadian Hockey League. “Through the years, I am always watching those games on TV and rooting for Canada. It’s exciting. When I’m not coaching, I can’t wait to watch it, and now that I am coaching it, I can’t wait to coach it.

“We all grew up with it. Come Christmas time on the 26th, we’re all watching hockey and the world juniors. I think all of Canada watches it, every fan. The spotlight is on all the players and the coaches, and that’s what makes it exciting. It’s a really big deal for Canada because it’s for the bragging rights of the best juniors in the world.”

In preparation of the year-end tournament, Hockey Canada’s summer showcase kicked off Saturday in Plymouth, Mich., with Hunter in tow to evaluate 41 CHL attendees representing 28 different clubs. Alongside the program’s head scout Brad McEwen, the Hunter brothers will have a voice in selecting the players who make up the final roster, one that will be built on those who fit the desired team identity.

“Canada has the Canadian way, which is we’re high-skilled players, tenacious, we work hard, and we skate,” Hunter explained. “We will have a fast team, so we will put a lot of pressure on the other team. We have to be the hardest working team out there, and we will. One of the things about us is we will work and we have great skill. With a combination like that, good things will happen.

“We’re going to be looking for that (team identity) right away. We’re going to look for a lot of speed and a lot of skill, but you have to be tenacious out there. We have to win the one-on-one battles. That’s the way the Canadians win championships.”

By the numbers look at our 41 players from 28 teams across @OHLHockey, @QMJHL, and @TheWHL invited to @HockeyCanada’s Summer Development Camp for #WorldJuniors.

Hunter is sharing the Development Camp experience with not only brother Mark, who is serving as part of the Program of Excellence management group, but also two of his own players from London in forwards Liam Foudy and Connor McMichael. However, he stresses there will be no favourtism when compiling the final roster.

“They know that I am fair. If they deserve to be here, they will make the team, and if they don’t, they won’t,” Hunter stated. “They are going to have to lay it all out on the line because we have great competition out here. You have to show that you belong here.

“We’re taking the best players for the job. Whoever plays the best will play. If I was a player, I would want it that way because then it’s in my hands where if I play well I am going to make the team, so it’s a challenge and it will be fun for them. They’ll be nervous but it’s a good nervous because they care about making the team.”

Meanwhile, following last year’s edition that saw hosting duties split between Vancouver and Victoria, the iconic tournament returns to Europe in 2019-20, where the larger ice surfaces will be one of the challenges Hunter and his staff are prepared to face. However, he notes that a team built around skating and speed should alleviate those concerns. Add in a group that Hunter wants to play with a high level of intensity, and Team Canada has a great shot at returning to the winner’s circle.

“If you have speed, the extra room on the ice doesn’t matter as much, but definitely we have to be aware of it. More than anything, it’s a wider ice surface and wider room behind the net, but with our speed and work ethic, we should do fine,” Hunter added. “The big ice surface, the different country, it’s good for the kids. I think they’re excited for it. It’s a big challenge, but we’re going to embrace it.”