Canade and Hardy commit to Steelheads 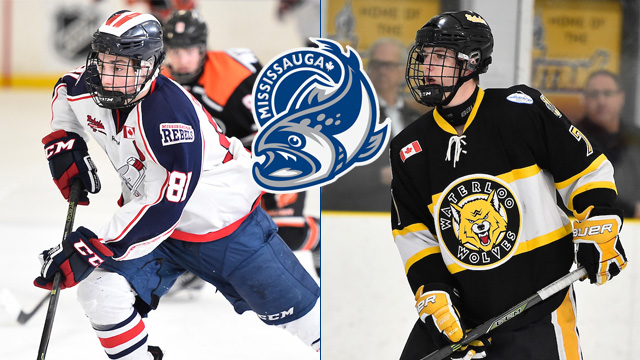 Mississauga, ON – The Mississauga Steelheads are pleased to announce the commitment of two prospects from the 2016 OHL Priority Selection, forward Nicholas Canade and defenceman Mason Hardy. Canade, a product of the Mississauga Rebels, was selected by the Steelheads in the 11th round (208th overall), while Hardy, a product of the Waterloo Wolves, was selected in the seventh round (128th overall).

Prior to being drafted by the Steelheads, Mississauga, Ont., native, Nicholas Canade had a successful season with the Rebels, recording 41 points (18 goals and 23 assists) in 71 games played. At the 2016 OHL Cup, Canade added two goals in five games for the Rebels. Last season, Canade played in 76 games for St. Andrews College of the Conference of Independent Schools Athletic Association (CISAA), where he put up 30 points (18 goals and 12 assists). He added a goal and an assist in five playoff games as the St. Andrews College Saints went on to win the CISAA title.

Hardy, a native of Kitchener, Ont., spent the 2015-16 season with the Waterloo Wolves where he recorded a goal and seven assists in 32 games. The 6’3”, 183lb defenceman added two goals and two assists in five playoff games, as well as a goal at the 2015-16 OHL Cup. Last season, Hardy appeared in 42 games for the Stratford Warriors of the Greater Ontario Junior Hockey League (GOJHL), where he registered nine points (three goals and six assists).

“Nicholas and Mason are both welcome additions to the Steelheads’ lineup,” said Steelheads head coach and general manager, James Richmond. “These are two players that have shown steady improvement from their first Steelheads’ training camp, and we’re very happy with how they’ve progressed. We’re excited to have Nicholas and Mason join our Steelheads family.”