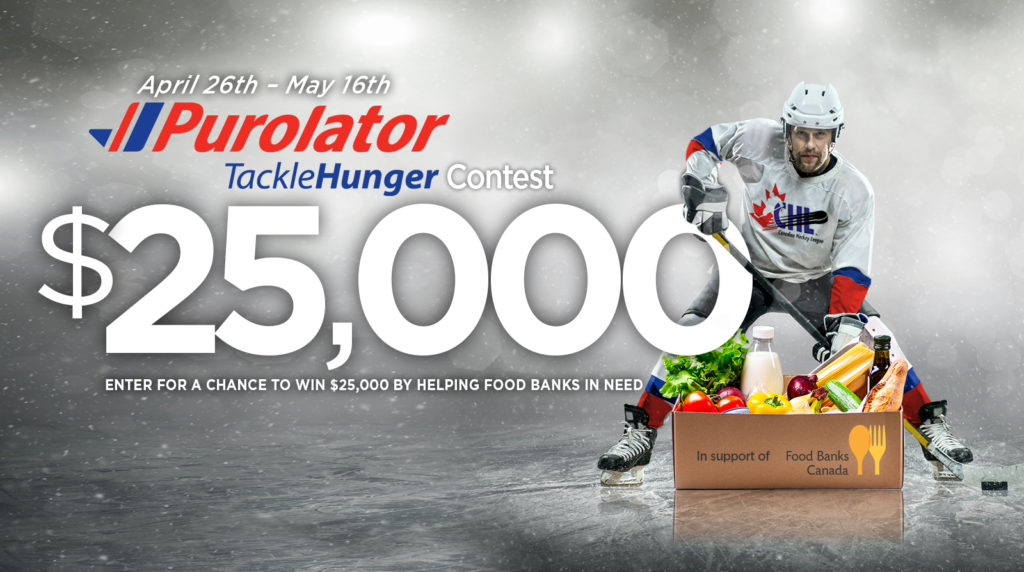 The Canadian Hockey League and Purolator are teaming up to deliver a better tomorrow.

Beginning April 26, the Canadian Hockey League is collaborating with Purolator to launch the Tackle Hunger Contest, with fans across nine provinces and three territories invited to help support a neighbour in need.

“The Canadian Hockey League is proud to work with Purolator to offer our fans a chance to win amazing prizes while supporting the Purolator Tackle Hunger program,” said CHL President Dan MacKenzie. “As two strong Canadian brands that are rooted in supporting local communities, the Tackle Hunger Contest demonstrates the benefits of partnership in these trying times.”

Contest tickets are available as 10 entries for $10, 60 entries for $18 – honouring the 60th anniversary of Purolator and the 18th year of the Purolator Tackle Hunger program – as well as 200 entries for $40. All proceeds will be donated to Food Banks Canada’s COVID-19 Response Fund. Fans are also encouraged to follow along on social media at #TackleHungerContest.

“More than ever, Canada’s food banks are in dire need of support and this initiative is a great opportunity for CHL fans to help others in their communities,” said Purolator Vice President, Corporate Strategy and

Marketing, Ramsey Mansour. “We’re so proud of our people and partnerships that make the Purolator

Tackle Hunger program a success. Working together, we can make a difference.”

Launched in 2003, the employee-led Purolator Tackle Hunger® program has helped deliver more than 16 million pounds of food to families across Canada.

About Purolator
Purolator Inc. is a leading integrated freight, package and logistics solutions provider in Canada. Celebrating 60 years of delivering its customers’ promises, Purolator continues to expand its reach and renowned service levels and reliability to more people, more businesses and more places across the country and around the world. Purolator is committed to contributing to the well-being of the communities it serves and works closely with its employees, partners, agents, customers and food banks across Canada to collect donations and help raise awareness about the issue of hunger in Canada. Since its inception in 2003, the Purolator Tackle Hunger® program has helped deliver the equivalent of more than 16 million pounds of food to food banks across Canada.