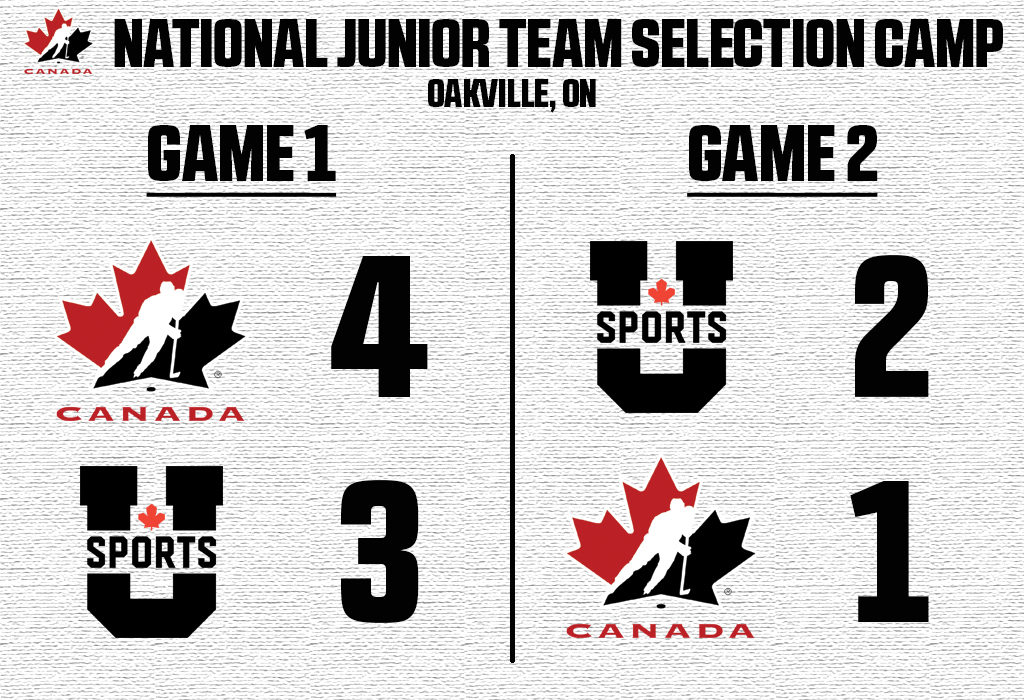 Canadian National Junior Team hopefuls settle for a split decision against the U SPORTS All-Stars at the Sixteen Mile Sports Complex in Oakville, Ont.

Here’s a look at Wednesday and Thursday’s game action featuring 12 OHL players in the Team Canada lineup opposite five graduates in the U SPORTS ranks.

Kevin Bahl (Ottawa 67’s) found the back of the net while Quinton Byfield (Sudbury Wolves) and Jamie Drysdale (Erie Otters) picked up assists as Canada’s National Junior Team hopefuls edged the U SPORTS All-Stars 4-3 on Wednesday.

Bowen Byram (Vancouver Giants) broke up a 3-3 tie 6:52 into the third period, providing the difference-maker while Nico Daws (Guelph Storm) stopped 11 of 12 and Joel Hofer (Portland Winterhawks) turned aside 13 of 15.

OHL graduate Kris Bennett (Saginaw Spirit/UNB) recorded a goal and an assist for the U SPORTS squad while Bryson Cianfrone (Owen Sound Attack/StFX) picked up a helper.

Hunter Jones (Peterborough Petes) and Olivier Rodrigue (Moncton Wildcats) split duty in the U SPORTS crease, turning away 17 of the 21 shots they faced.

Canada won the five-minute three-on-three overtime portion of the game on a goal from Dylan Holloway before U SPORTS prevailed in the five-man shootout as Jones stopped four of five.

GAME OVER | 🇨🇦 wins the first game of the @SportChek Selection Camp series 4-3 over @USPORTSca.

Nico Daws (Guelph Storm) and Joel Hofer (Portland Winterhawks) combined to stop 11 of the 12 shots that came their way for U SPORTS opposite Canada’s Olivier Rodrigue (Moncton Wildcats) and Hunter Jones (Peterborough Petes) who made 20 saves as their side was outshot 23-12.

Akil Thomas (Niagara IceDogs) picked up an assist for Canada in the loss before a sold out crowd at the Sixteen Mile Sports Complex.

U SPORTS took the pre-arranged five minute three-on-three overtime session on a goal from Collin Shirley (Kamloops Blazers/Saskatchewan) before also taking the shootout by a tally of 2-1.