Catching Up with #OHLAlumni: Scott Harrington 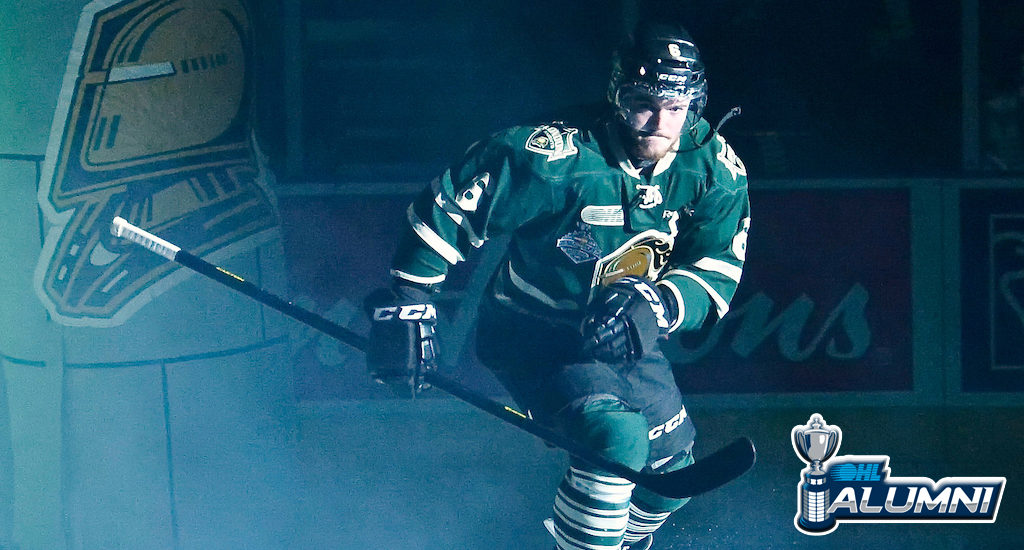 The trend began before Harrington embarked on his four year OHL tenure. The Kingston native won an OJHL Jr. A championship with his hometown Voyageurs in 2009. His strong playoff showing against bigger, stronger and more experienced players convinced the Knights to select him with their first round, 19th overall pick in the 2009 OHL Priority Selection.

Now in the Columbus Blue Jackets organization, Harrington keeps an eye on what’s happening with his former club in the green and gold.

“Obviously I was hoping the Knights would have made it a little further into the playoffs,” said Harrington of London’s demise at the hands of the eventual champion Erie Otters in overtime of Game 7 in the second round. “It was a great Memorial Cup though and it’s great to see it staying in the OHL. Windsor did a great job as hosts – that’s a really tough trophy to win.”

A second round pick by the Pittsburgh Penguins in 2011, Harrington also spent time in the Toronto Maple Leafs organization before landing with Columbus in a trade that saw Toronto acquire Guelph Storm graduate Kerby Rychel last June.

Though he was in and out of the lineup this past season, Harrington tried to take it as a chance to learn and grow as a player.

“Every year you try and progress your game and try and find ways to improve as you get older and gain more experience,” he said. “I enjoyed my time this past year in Columbus and I’m really looking forward to getting back at it in the fall.”

Harrington, who also put together an extensive international resume with Hockey Canada that includes an Ivan Hlinka gold medal, Under-17 silver, and World Junior bronze, has enjoyed being part of the OHL Alumni Association. Having just completed its second year in existence, the OHL Alumni Association is a member focused organization with the primary function of forming a global hockey based community directed towards strengthening and sustaining the connection and relationship between alumni, the league, and current players.

“I think it’s great,” said Harrington at the 2nd annual OHL Alumni Association Golf Classic held June 6th at the Devil’s Pulpit Golf Association in Caledon, Ont. “We don’t ever get a chance to come together like this and it’s great to look back on all the great memories you’ve made playing in the OHL and all the fun times you had making new friends.

“It brings back all those memories.”

Harrington and the other 123 attendees at the OHL Alumni Association Golf Classic helped raise over $15,000 for the Gudbranson Stem Cell Research Grant, a fund inspired by the journey of Dennis Gudbranson, the younger brother of OHL graduates Erik (Kingston Frontenacs 2008-11) and Alex (Kingston, Sault Ste. Marie 2010-14).  Dennis was diagnosed with AML Leukaemia in 2002 but after being matched to a generous donor, Dennis received a life-saving bone marrow transplant.