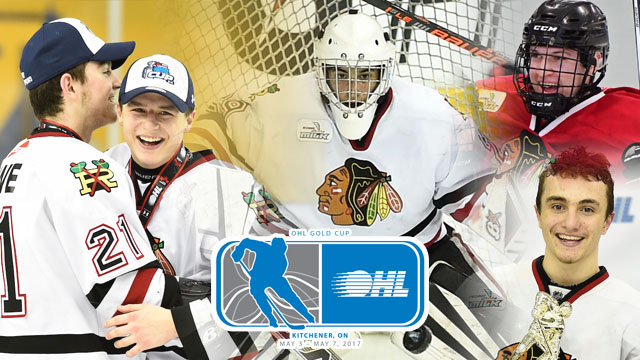 A total of 20 OHL prospects are OHL Gold Cup champions as members of Team GTHL Red. Among them are five members of the OHL Cup champion Mississauga Reps who have been reunited as victors once again, steering their club to a 5-0 finish with a 3-1 victory on Sunday.

Rees scored the game winner on Sunday, connecting with Ottawa 67’s first round pick Graeme Clarke just 17 seconds into the second period to give GTHL Red a 2-1 lead.

He finished tied for the GTHL Red team lead in scoring with seven points including four goals and three assists in five games.

“It’s pretty special,” said Rees after the win. “Winning the OHL Cup and then coming here with these guys to do it again, you couldn’t have planned it any better.”

The five Reps join a list of names that includes Matthew Strome (Hamilton Bulldogs), Ryan McLeod (Mississauga Steelheads), Elijah Roberts (Kitchener Rangers) and other members of the 2015 OHL Cup champion Toronto Marlboros to win both events in the same season.

“We had some really good trainers and coaches here that helped us come together and have success quickly,” Rees added. “I had a lot of fun here with the boys, meeting new people and playing with guys who used to be rivals.”

Soon to be an OHL rival, teammate Lucas Rowe is preparing to suit up against Rees’ Sarnia Sting up the 402 as a member of the London Knights next season.

“Playing together for two years now it’ll be a little rough,” Rowe said of the two parting ways. “I’ll have to give him a few bumps here and there but I think it’ll be fun.”

Dugas would make 20 saves in goal to preserve the win and earn Player of the Game honours for Team GTHL Red. He led all goaltenders with three wins in the tournament while posting a 1.67 goals-against average and .934 save percentage.

This marks the third consecutive year a GTHL club has claimed OHL Gold Cup supremacy after Team GTHL Blue took the title in both 2015 and 2016.

Hockey Canada representatives were on hand to take in last weekend’s action in an effort to identify those players who will be invited to the National Under-17 Development Camp that is set to take place this summer. Top players will be chosen to represent Canada at the 2017 World Under-17 Hockey Challenge in Dawson Creek and Fort St. John, BC in November.