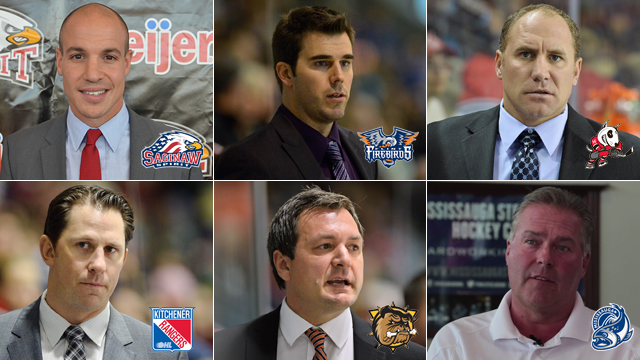 Opening week is upon us and the 2016-17 season is about to get underway.

Three new general managers, six newly appointed head coaches and a number of other staff getting adjusted to new positions are ready to drop the puck on the new campaign.

Here’s a look at some of the hockey operations moves from across the league throughout this past offseason.

The Otters brought in Wes Wolfe as an assistant coach, signing him to a two-year agreement. Wolfe served as the head coach and assistant general manager of the GOJHL’s St. Catharines Falcons Jr. B club, leading them to a second place finish of 33-12-5 and a berth in the Golden Horseshoe Finals last season.

FLINT FIREBIRDS: There have been wholesale changes made in Flint as newly minted head coach Ryan Oulahen takes over at the helm alongside assistant Eric Wellwood. Scott MacDonald remains with the club as assistant coach and video coordinator.

An OHL graduate and former captain of the AHL’s Grand Rapids Griffins, Oulahen spent the past six seasons with the North Bay Battalion under head coach Stan Butler.

Wellwood was a Mastercard Memorial Cup champion with the Oshawa Generals in 2015. An OHL graduate, Wellwood joins the Firebirds after serving as an assistant under Bob Jones in Oshawa last season.

The Firebirds additionally hired long-time bench boss George Burnett as general manager. Burnett, who coached the Hamilton Bulldogs last season, has 20 years of OHL coaching experience, winning over 600 games and an OHL title with Guelph in 1998.

Staios, who played three OHL seasons between Niagara Falls and Sudbury from 1990-93, went on to play parts of 16 NHL seasons, most prominently with the Edmonton Oilers.

Staois announced the hiring of former Flint Firebirds coach John Gruden, who will be joined by remaining associate coach and assistant general manager Troy Smith on the bench.

KINGSTON FRONTENACS: The Frontenacs added a pair of OHL graduates in Phil Mangan and Chris Longo to the club’s hockey operations.

Mangan, who skated with the Frontenacs from 2004-06 before a three-year QMJHL career will serve as an assistant coach. The Gananoque native was an assistant with the OJHL’s Kingston Voyageurs Jr. A last season.

Longo, who was the OHL’s Rookie of the Year in 1990, played three seasons with the Peterborough Petes from 1989-92 before a pro career spent largely with the IHL’s Cleveland Lumberjacks. Longo will be the club’s skills and development coach.

KITCHENER RANGERS: After Mike Van Ryn accepted a development position with the Arizona Coyotes, the Rangers had a void to fill on the bench.

Former NHL defenceman Jay McKee, who served as an assistant with the Rangers last season, will assume the role.

McKee had a three-year OHL career between Sudbury and Niagara Falls from 1993-96 before a 13-year NHL career spent largely with the Buffalo Sabres.

A Cobourg, ON, native, Simpson has been with the organization since 2012.

MISSISSAUGA STEELHEADS: Entering what looks to be an exciting season in Mississauga, the Steelheads have shuffled the deck within their hockey operations department.

Two-time OJHL Coach of the Year James Richmond takes the reins as head coach while James Boyd will serve solely as the club’s general manager.

Former goaltending coach Kory Cooper accepted a role with the AHL’s Binghamton Senators, opening the door for Ryan Daniels (SAG, PBO, 2004-09) to step into the role.

NIAGARA ICEDOGS: Long-time OHL assistant coach Dave Bell takes over as head coach in Niagara as the IceDogs enter a new era with a number of fresh faces in the lineup.

Bell, who played under Brian Kilrea with the Ottawa  67’s from 1994-98, has served as an assistant coach in Owen Sound, Barrie, Sudbury and Niagara dating back to 2004. He also spent two years as an assistant with the AHL’s Springfield Falcons.

The Dogs brought in OHL graduate Kris Sparre (BAR, MISS, 2005-08) to serve alongside Bell and Billy Burke as an assistant coach while recently naming Jay McKnight’s the team’s skating coach.

NORTH BAY BATTALION: The Troops added OHL graduate Adam Dennis (GUE, LDN, 2002-06) as assistant general manager and assistant coach in late August as he steps in for Ryan Oulahen who accepted a head coaching position with the Flint Firebirds.

Dennis won a Mastercard Memorial Cup title with the Knights in 2005 before a minor league career spent with the AHL’s Rochester Americans and Portland Pirates before stints in Germany and Italy.

Recently retired, McIver played one season in Scotland following a 10-year minor league career in the American Hockey League. He played in 36 career NHL contests with the Vancouver Canucks.

OTTAWA 67’s: The 67’s added OHL graduate Brad Brown (NB, BAR, 1991-96) as an assistant coach as he joins Jeff Brown and Mike Eastwood behind the bench.

Letang comes from the KHL where he was an assistant coach with Mevescak Zagreb out of Croatia. Letang enjoyed a lengthy pro career that included the past decade spent between Germany and Croatia.

SAGINAW SPIRIT: The Spirit hired 2014 ECHL Coach of the Year Spencer Carbery to be the seventh head coach in franchise history.

Carbery, who was head coach and director of hockey operations with the South Carolina Stingrays from 2011-16, will be joined on the bench by newly hired associate coach Chris Lazary, formerly of the Sarnia Sting.

Lazary coached the GOJHL’s Waterloo Siskins Jr. B to a Cherrey Cup title as Midwestern conference champions in 2014.

Staubitz, who is a Sarnia product, was the Sting’s strength and conditioning coach last season. He played 230 career NHL contests between 2008 and 2013 with San Jose, Minnesota, Montreal and Anaheim.

Ward spent the past two seasons as video coach of the AHL’s Toronto Marlies and also has past experience as video coordinator of the New York Islanders.

Stewart had a stint with the London Knights during the 1995-96 season and also played goal at Saint Mary’s University.

A Sudbury native, Papineau played two years in the OHL with the Ottawa 67’s and Detroit Ambassadors from 1988-91, and has served as a scout with the Carolina Hurricanes for the past five seasons.

Moxam joins the Wolves after serving as an assistant coach with the Laurentian University Voyageurs Men’s Hockey team for the past three seasons.

WINDSOR SPITFIRES: The Spitfires hired long-time Detroit Red Wings goaltending coach Jim Bedard  this past summer, bringing him in to work with the club’s netminders.

Once the goaltending coach of the Niagara Falls Thunder in the early 90’s, Bedard joined the Red Wings in 1996, remaining with the club until the end of last season. He is a three-time Stanley Cup champion.