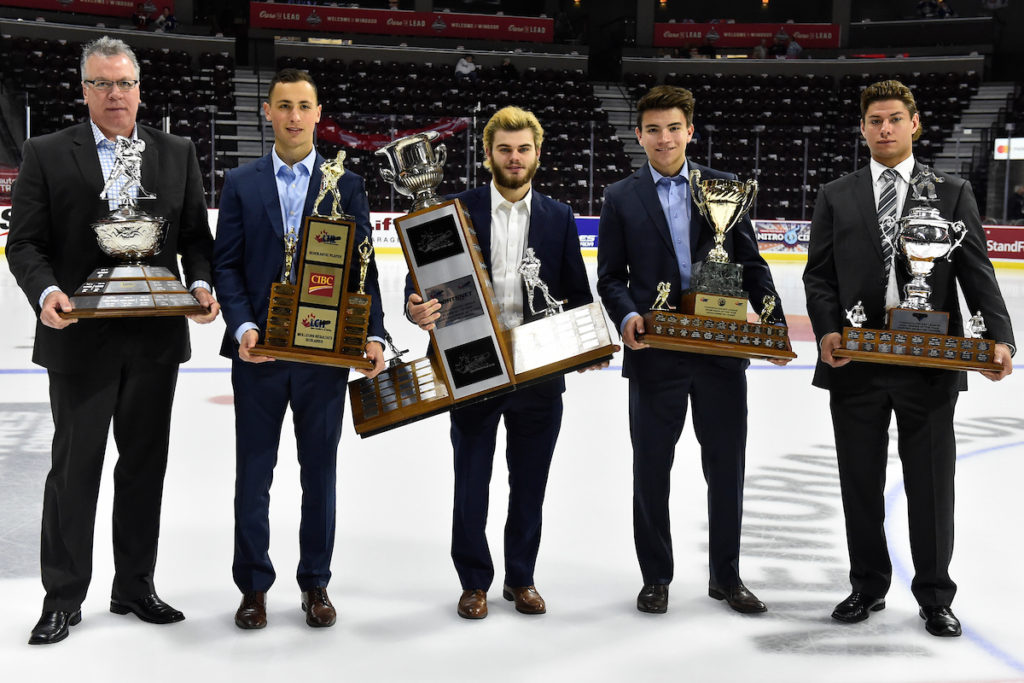 Windsor – The Canadian Hockey League today announced the 10 national award winners for the 2016-17 season including Chicago Blackhawks prospect Alex DeBrincat of the Erie Otters who earned Sportsnet CHL Player of the Year honours.

The awards were presented as part of the 2017 Mastercard Memorial Cup festivities in Windsor.

Sherwin-Williams Top Prospect Award: Nolan Patrick, Brandon Wheat Kings
Brandon Wheat Kings captain Nolan Patrick is listed number one in NHL Central Scouting’s Final Rankings for the 2017 NHL Draft in Chicago.  The 18-year-old forward from Winnipeg, MB, wrapped up his third WHL season with 20 goals and 26 assists for 46 points limited to just 33 games played due to injury.  He is the first WHL player to earn this award since Seth Jones of the Portland Winterhawks in 2013, and could be the first western Canadian to be chosen first overall since Ryan Nugent-Hopkins of the Red Deer Rebels in 2011.  Finalists for the award include Nico Hischier of the Halifax Mooseheads who was listed second by NHL Central Scouting, and Gabe Vilardi of the Windsor Spitfires ranked fourth.

Chrysler Top Scorer Award: Sam Steel, Regina Pats
Anaheim Ducks prospect Sam Steel led the CHL with 131 points in 66 games played scoring 50 goals and 81 assists along with a plus-minus rating of plus-49 helping the Regina Pats to a first place finish atop the WHL’s regular season standings.  The 19-year-old from Sherwood Park, AB, delivered the CHL’s highest point total since Brendan Shinnimin of the Tri-City Americans recorded 134 points in 69 games played during the 2011-12 campaign.  Finalists for the award were Chicago Blackhawks prospect Alex DeBrincat of the Erie Otters with 127 points in 63 games, and Columbus Blue Jackets prospect Vitalii Abramov of the Gatineau Olympiques who scored 104 points in 66 games this season.

BRP Sportsman of the Year Award: Nick Suzuki, Owen Sound Attack
2017 NHL Draft prospect Nick Suzuki of the Owen Sound Attack finished fifth in OHL scoring with 96 points including 45 goals and 51 assists in 65 games played with a plus-minus rating of plus-51 while recording just 10 penalty minutes.  The 17-year-old from London, ON, is listed tenth by NHL Central Scouting and helped the Attack secure franchise best marks of 49 wins and 102 points this season.  Finalists for the award were Tyler Steenbergen of the Swift Current Broncos and Hugo Roy of the Sherbrooke Phoenix.

Mastercard Humanitarian of the Year Award: Tyler Wong, Lethbridge Hurricanes
Lethbridge Hurricanes captain Tyler Wong is the CHL’s Humanitarian of the Year after being named a finalist for the award last season, establishing himself as an exceptional ambassador for his team and the league both on and off the ice.  The 21-year-old from Cochrane, AB, carried forward the ‘Canes KidSport program he introduced a year ago which donates $5 to KidSport Lethbridge & Taber for each goal he scores.  Powered by 51 goals of his own and with the help from teammates, alumni, and the community, the initiative surpassed all expectations and raised over $13,000 this season.  Finalists for the award were Garrett McFadden of the Guelph Storm and two-time nominee Samuel Laberge of the Rimouski Oceanic.

CIBC Scholastic Player of the Year Award: Sasha Chmelevski, Ottawa 67’s
2017 NHL Draft prospect Sasha Chmelevski of the Ottawa 67’s achieved a 98% average across his six Grade 12 courses through Michigan’s Virtual Charter Academy.  The 17-year-old from Northville, Michigan, also scored 21 goals and 22 assists for 43 points in 58 games appearing 43rd among North American players listed by NHL Central Scouting.  Finalists for the award were Brian King of the Everett Silvertips and Antoine Samuel of the Baie-Comeau Drakkar.

Jane’s Brian Kilrea Coach of the Year Award: Ryan McGill, Owen Sound Attack
Ryan McGill led the Owen Sound Attack to an all-time franchise best record of 49-15-2-2 for 102 points surpassing the club’s previous highs of 46 wins and 97 points set during the 2010-11 season.  The 48-year-old from Sherwood Park, AB, helped the Attack become the league’s most improved team in just his second season behind the bench increasing their win total by 17 and point total by 27 while establishing a franchise record 15-game winning-streak and surrendering an OHL-low 177 goals against.  McGill was previously nominated for this award in 2013 during his tenure with the Kootenay Ice.  Finalists for the award were John Paddock of the Regina Pats and Danny Flynn of the Saint John Sea Dogs.

CCM Rookie of the Year Award: Nico Hischier, Halifax Mooseheads
2017 NHL Draft prospect Nico Hischier of the Halifax Mooseheads led all rookies in scoring with 86 points in 57 games including 38 goals and 48 assists.  The 18-year-old from Naters, Switzerland, was chosen sixth overall in the 2016 CHL Import Draft and is listed second in NHL Central Scouting’s final draft rankings.  He becomes the second Moosehead to win the award following current Winnipeg Jet Nikolaj Ehlers in 2014, and will challenge for the NHL’s top pick in June where he would follow 2013 first overall pick and Moosehead grad Nathan MacKinnon who currently stars with the Colorado Avalanche.  Finalists for the award were Aleksi Heponiemi of the Swift Current Broncos and Ryan Merkley of the Guelph Storm.

Vaughn Goaltender of the Year Award: Michael McNiven, Owen Sound Attack
Montreal Canadiens prospect Michael McNiven of the Owen Sound Attack carried a record of 41-9-2-2 including six shutout victories that tied for an OHL-high, while also posting a league-low goals-against-average of 2.30 and save percentage of .915 that ranked sixth overall in the OHL.  The 41 wins by the 19-year-old from Georgetown, ON, led the OHL this season and established a new Attack single season record while his shutout tally brings his three-year career total to 11 which is also a new team mark.  Finalists for the award were Philadelphia Flyers prospect Carter Hart who was the 2015-16 recipient, and Francis Leclerc of the Blainville-Boisbriand Armada.

Superstore Defenceman of the Year Award: Thomas Chabot, Saint John Sea Dogs
Ottawa Senators prospect Thomas Chabot of the Saint John Sea Dogs is the CHL’s Defenceman of the Year after scoring 10 goals and 35 assists for 45 points in just 34 games played.  The 20-year-old from Ste-Marie-de-Beauce, QC, was also a member of Canada’s National Junior Team earning a silver medal and Tournament MVP honours at the 2017 IIHF World Junior Championship.  The 18th overall pick in the 2015 NHL Draft helped the Sea Dogs to a first place finish in the QMJHL this season.  Finalists for the award were Edmonton Oilers prospect Ethan Bear of the Seattle Thunderbirds and Darren Raddysh of the Erie Otters.

Sportsnet Player of the Year Award: Alex DeBrincat, Erie Otters
Chicago Blackhawks prospect Alex DeBrincat of the Erie Otters led the OHL with 127 points in 63 games scoring 65 goals and 62 assists along with a plus-minus rating of plus-60.  The 19-year-old from Farmington Hills, Michigan, helped the Otters capture a second straight regular season title and set a CHL record with their fourth straight 50-win season.  The former CHL Rookie of the Year set a team record for goals in a season while eclipsing the 50-goal and 100-point plateau for the third straight season.  He is the second Otter to win the award in three seasons following current Edmonton Oilers star and NHL Top Scorer Connor McDavid who received the honour in 2015.  Finalists for the award were Anaheim Ducks prospect Sam Steel of the Regina Pats, and Columbus Blue Jackets prospect Vitalii Abramov of the Gatineau Olympiques.