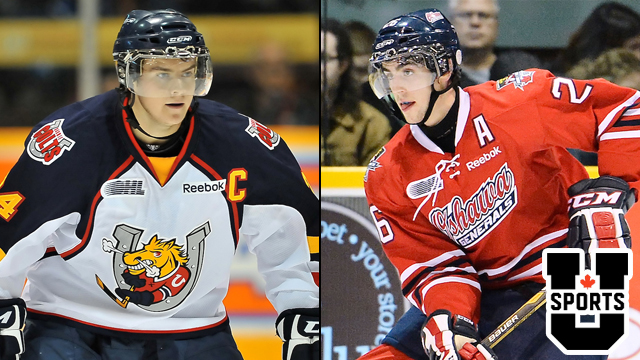 The elite group will be honoured in Ottawa on November 8, when His Excellency the Right Honourable David Johnston, Governor General of Canada, presents the fourth annual Governor General’s Academic All-Canadian Commendation to the eight recipients during a ceremony at Rideau Hall, his official residence.

Every year, a growing number of CIS student-athletes are recognized as Academic All-Canadians, having maintained an average of 80 per cent or better over the academic year while competing for one – or more – of their university’s varsity teams.

Among these outstanding individuals, one female and one male student-athlete from each of the four CIS regional associations are selected annually to make up the Top Eight.

“The number of Academic All-Canadians speaks volume about the quality of our student-athletes, but also our coaches, support staff and our universities,” said Graham Brown, chief executive officer of CIS. “To be selected among 12,000 of their peers is an achievement these exceptional student-athletes should be extremely proud of. They represent the very best of what university sport is all about.”

Waterloo, Ont., native Colin Behenna was named OUA West MVP last season, and a second-team All-Canadian, after recording 44 points in 27 games – the third most in the county. In four season with the Warriors, Behenna racked up 150 points, ranking him third overall on the Warriors all-time scoring list.

Academically, studying Math and Business, Behenna was named to the President’s Academic Honour Roll, and volunteered with Habitat for Humanity.

“Colin had a tremendous impact on the Warrior hockey program,” said Waterloo men’s hockey head coach Brian Borque. “From the first day he stepped on campus he led by example by being a great student, a motivated athlete, an excellent leader, and a great teammate.”

Raised in Thornhill, Ont., Geoff Schemitsch joined the Axemen for the 2013-2014 season, and made an immediate impact. Named to the AUS All-Rookie team in his first season, the blueliner helped Acadia win the 2014 AUS title before posting a career-best three goals and 22 points – good for fifth in the conference – en route to Second-Team All-Star honours this past season.

Studying Kinesiology, Schemitsch is a three-time Academic All-Canadian (2014-2016) and was named to the Dean’s List from 2013-2016. He has also received numerous academic awards since arriving studying at Acadia, including the Sully Ashfield and Barbara Bill Ashfield Award, the Acadia Sports Therapy Clinic Award, and the Kirton Scholarship. The 24-year-old is also prominent in the community, volunteering at various fundraisers, group activities and team functions with minor hockey players affiliated with Acadia University’s minor hockey program.

“Geoff is arguably one of the most committed, intelligent and hardest working individuals I have coached,” said Acadia men’s hockey head coach Darren Burns. “(He) is now a captain on our team and is doing exactly what I envisioned he would accomplish on our campus, in the local community and on the ice. I marvel at his accountability and responsibility in leading others.”

Canadian Interuniversity Sport is the national governing body of university sport in Canada. Every year, over 12,000 student-athletes and 700 coaches from 56 universities and four conferences vie for 21 national championships in 12 different sports. CIS also provides high performance international opportunities for Canadian student-athletes at Winter and Summer Universiades, as well as numerous world university championships. For further information, visit www.cis-sic.ca or follow us on: