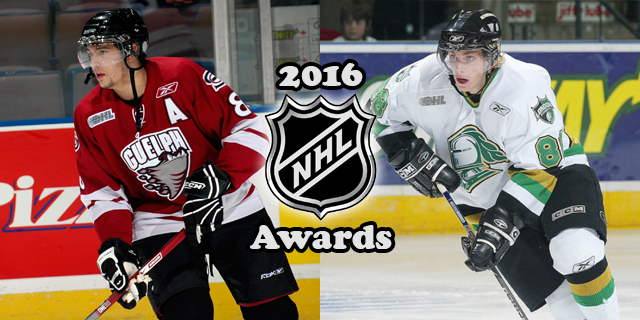 CHL graduates were in the spotlight at the 2016 NHL Awards in Las Vegas on Wednesday, with eight alumni coming away as winners following standout 2015-16 seasons.

Most prominently, London Knights graduate Patrick Kane took both Hart Trophy honours as the NHL’s MVP as well as the Ted Lindsay Award presented to the NHL’s most outstanding player as voted by the players.

Kane’s tremendous season also included becoming the first American to win the Art Ross Trophy as the NHL’s leading scorer with 46 goals, 60 assists and 106 points in 82 games. He becomes the first member of the Blackhawks to win the Hart Trophy since former St. Catharines Teepee Stan Mikita in 1968. Kane is the third straight CHL graduate to earn the distinction, following Sidney Crosby (Rimouski Oceanic/Pittsburgh Penguins) in 2014 and Carey Price (Tri-City Americans/Montreal Canadiens) in 2015.

Guelph Storm graduate Drew Doughty claimed the first Norris Trophy of his accomplished career, earning NHL Defenceman of the Year honours after recording 14 goals, 37 assists and 51 points in 82 games with a plus/minus rating of plus-24. He becomes the third CHL grad to win the award in the past four seasons, following P.K. Subban (Belleville Bulls/Montreal Canadiens) in 2013 and Duncan Keith (Kelowna Rockets/Chicago Blackhawks) in 2014.

Vezina Trophy honours given to the NHL Goaltender of the Year were presented to Saskatoon Blades graduate Braden Holtby of the Washington Capitals. The Lloydminster, Saskatchewan native was the runaway winner, receiving 26 first-place votes from a total of 30 cast by NHL general managers. The 26-year-old Holtby finished the season with a record of 48-9-5 to go with a 2.20 goals-against-average and a .922 save percentage with three shutouts over 66 games. His 48 wins tied fellow CHL graduate Martin Brodeur’s 2007 NHL single-season record.

Also in the crease, Kitchener Rangers graduate John Gibson and goaltending partner Frederik Andersen of the Anaheim Ducks shared the William M. Jennings Trophy awarded to the team with the lowest goals against during the regular season. In his second full NHL season, Gibson played to a 21-13-3 record with a 2.07 goals-against average and a .920 save percentage with four shutouts over 40 games.

Kelowna Rockets graduate Shea Weber earned the Mark Messier NHL Leadership Award presented to the player selected by Messier who is recognized as a superior leader within the sport. Having concluded his 11th NHL season, the Nashville Predators captain recorded 20 goals, 31 assists and 51 points over 78 games. The former MasterCard Memorial Cup champion continues to be recognized as one of the NHL’s premier two-way defencemen.

Definitely something the smile about.

Another solid blueliner, Mark Giordano was recognized for his off-ice contributions on Wednesday as he was awarded the NHL Foundation Player Award presented annually to the player who applies the core values of hockey – commitment, perseverance and teamwork – to enrich the lives of people in his community. The Calgary Flames rearguard and Owen Sound Attack graduate, who was never drafted into the OHL or NHL, recorded a career-high 21 goals this season to go with 35 assists and 56 points over 82 games.

Off the ice, Stanley Cup champion and former OHL goaltender and general manager Jim Rutherford claimed NHL General Manager of the Year honours. Rutherford steered the Pittsburgh Penguins to their fourth Stanley Cup title in franchise history, bringing in key components to their playoff run through various trades. Rutherford, who played goal with the OHL’s Hamilton Red Wings from 1967-69 before serving as general manager of the Windsor Compuware Spitfires and Detroit Jr. Red Wings from 1984-94, wrapped up his 21st season as an NHL GM.

A Western Hockey League graduate who played with the Regina Pats from 1979-82, Barry Trotz received the Jack Adams Award as NHL Coach of the Year. Trotz led the Washington Capitals to their second President’s Trophy in franchise history, finishing the regular season with a record of 56-18-8 for 120 points. The 56 wins were the most in Capitals franchise history.

The NHL also announced its 2015-16 all-star and all-rookie teams on Wednesday. A total of 10 CHL graduates were recognized on first, second and all-rookie all-star teams. (listed below)