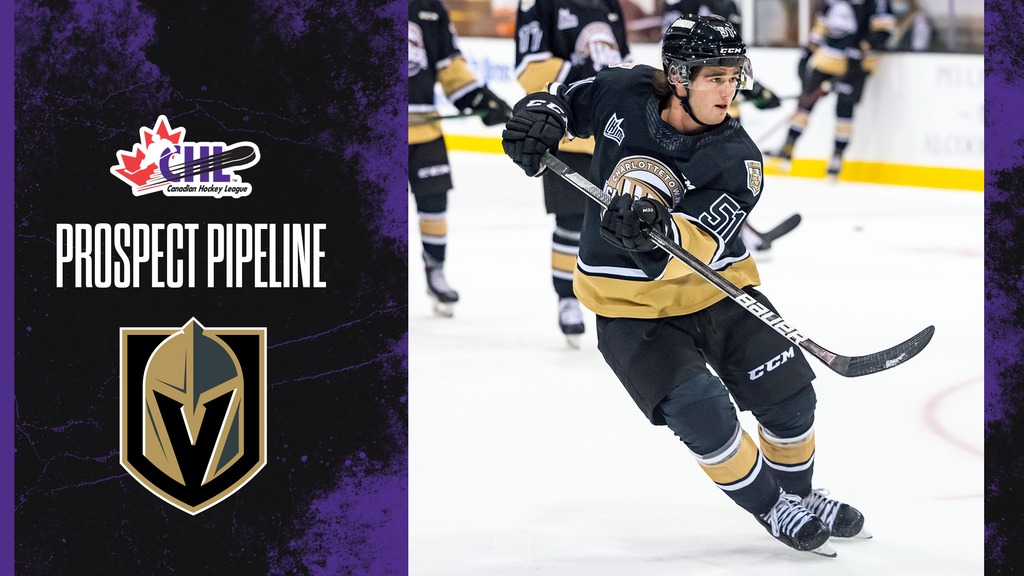 CHL Prospect Pipeline highlights those who played in 2021-22, who were born in 2001 or later, and are signed by or on the reserve list of an NHL club.

Putting together a dominant first season in the North American market after being selected by the Charlottetown Islanders in the opening round of the 2020 CHL Import Draft, the Czech centre impressed with 17 goals and 47 assists coming in 58 appearances, good for top spot among all QMJHL rookies. Brabenec then continued his offensive showcase in the postseason where he added another 19 points in 15 outings. Bringing excellent on-ice vision, the talented forward was recognized for his play with the Michel Bergeron Trophy as the QMJHL’s Offensive Rookie of the Year. Brabenec, 18, was chosen by the Golden Knights in the fourth round of the 2021 NHL Draft.

A lanky rearguard, Chayka uses his excellent reach and quick feet to close gaps and turn aside the opposition. Chosen seventh overall in the 2018 OHL Priority Selection, the Russian-born, Canadian-trained skater has spent the past three campaigns with the Guelph Storm underscored by a career high of 39 points coming in 53 appearances in 2021-22. A 2021 second-round selection by Vegas, the 19-year-old then inked his first contract with the club last September.

A big-time blue-liner who uses his smarts to neutralize oncomers, Cholach saw 56 appearances with the Barrie Colts last season and also chipped in offensively to the tune of one goal and 12 assists. Joining the club following his third-overall selection in the 2021 CHL Import Draft, the Ukrainian rearguard will look to further hone his scoring touch in the coming seasons. Cholach, 19, was a sixth-round selection by the Golden Knights in the 2021 NHL Draft.

Among the most offensively gifted defencemen in the circuit, the Charlottetown Islanders rearguard has racked up the points over his junior career, again showing it in the most recent campaign where through 62 outings he led all QMJHL rearguards with 33 goals and 81 points. For his efforts, the 20-year-old native of Sainte-Marie-de-Kent, N.B., earned the Emile Bouchard Trophy as the league’s Defenceman of the Year, doing so for the second year running. The fourth-overall selection from the 2018 QMJHL Entry Draft, Cormier’s time with the Islanders has counted 208 career contests in which he has registered 207 points. Cormier has also earned several opportunities to star with Team Canada on the national stage, with his most recent appearance coming in this summer’s edition of the World Juniors. A 2020 third-round selection by the Golden Knights, Cormier agreed to an entry-level contract with the club that December.

A fleet-footed centre, Dean is a budding playmaker who uses his natural abilities to find his linemates in scoring positions. Showing promising offensive progression over his time with the Gatineau Olympiques, Dean posted north of a point per game last season in tallying 21 goals and 31 assists over 47 contests. Chosen fourth overall in the 2019 QMJHL Entry Draft, Dean’s time in the junior circuit has seen him collect 118 points in 127 total appearances. A 19-year-old native of Grande Prairie, Alta., Dean has also spent time with the national program including a five-game showing with Canada Black at the 2019 World Under-17 Hockey Challenge where he finished tied for tops in team scoring with seven points. Chosen 30th overall by the Golden Knights in the 2021 NHL Draft, Dean then subsequently signed his entry-level contract with the club the following December.

Bringing size and a solid two-way game to the middle of the ice, the 19-year-old Slovakian import excelled in his first season in North America, making a smooth transition with the Edmonton Oil Kings where through 55 appearances he neared point-per-game production with 20 goals and 34 assists. The budding talent then added another 17 points through 19 playoff contests to help the Oil Kings raise the Ed Chynoweth Cup. The Golden Knights called upon Demek in the fourth round of the 2021 NHL Draft.

A slick stick handler, the talented left winger had an offensive breakout with the Charlottetown Islanders in 2021-22, leading the squad with 104 points through 68 appearances as one of just seven QMJHL skaters to reach triple-digit production. The 20-year-old native of Magog, Que., didn’t slow down in the postseason either as he led all league skaters with 13 goals and 28 points. For his efforts, Guay was named to the QMJHL First All-Star Team. A fifth-round selection by Vegas in this summer’s NHL Draft, the coming season will see Guay join the Blainville-Boisbriand Armada.

An all-situations centre, Gustafson can be counted on in all zones, bringing intriguing offensive upside to boot. Making 58 appearances with the Seattle Thunderbirds last season, Gustafson finished sixth in team scoring with 52 points counting 23 goals and 29 assists. The eighth-overall selection from the 2019 WHL Draft, Gustafson has recorded 63 points through 82 career contests with the Thunderbirds. An 18-year-old native of Ardrossan, Alta., Gustafson was chosen by the Golden Knights in the third round of this summer’s NHL Draft.

Finding his chances by beating defenders off the rush, the Everett Silvertips centre put together a solid first full season where through 57 appearances he proved to be a good secondary scoring option in producing 10 goals and 37 assists for 47 points. It ultimately paid off for the 18-year-old product of Sherwood Park, Alta., as he was chosen by the Golden Knights in the sixth round of the 2022 NHL Draft.

Skating in his second season with the Brandon Wheat Kings, the Finnish overager offered up pro size and a dangerous shot. Making 36 appearances in 2021-22, Kallionkieli provided good support in chipping in with 11 goals and 16 assists. A 2019 fifth-round selection by the Golden Knights, the talented left-wing will join the pro ranks next season and should make a quick transition after already seeing a six-game trial run in the minors.

Owning an impressive combination of size, skating, and puck skills, the Czech centre made an immediate impact with the Saginaw Spirit in 2021-22 as through 68 appearances he finished tied for third in team scoring with 52 points counting 18 goals and 34 assists. That parlayed into Sapovaliv hearing his name called early on draft day as the 18-year-old went 48th overall to the Golden Knights this summer.

Joining the Vancouver Giants following his eighth-overall selection in the 2021 CHL Import Draft, the Swedish netminder impressed in his first season in the junior ranks where through 35 outings he found the win column 17 times and posted a 3.05 goals-against average and .903 save percentage. Vikman, 20, was chosen by the Golden Knights in the fifth round of the 2020 NHL Draft.