CHL Week That Was – Islanders rewriting the record books 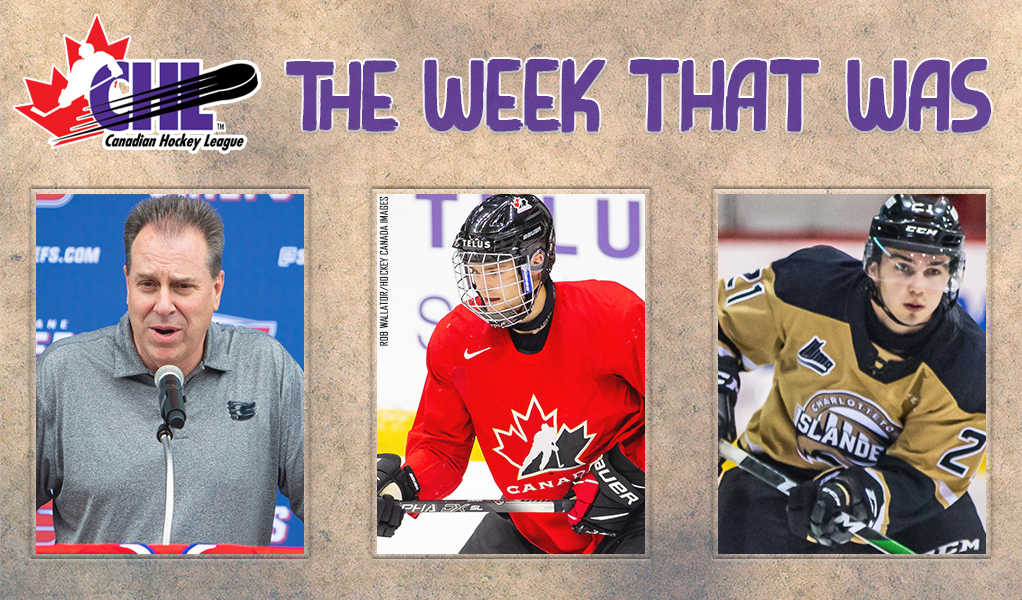 There is no sinking the Charlottetown Islanders.

Through the opening six weeks of action, the Prince Edward Island club stands atop the QMJHL’s Maritimes Division with an astounding 12-2-0-0 showing, good for 24 points.

Among the top clubs in the ‘Q’ last season – the Islanders sat seventh with 71 points when play came to a halt in March – the team has taken the next step this year as fans across the Island begin to dream about the possibility of a franchise-first President’s Cup championship.

For the Islanders, pushing the pace this season has been a somewhat unlikely hero in diminutive overage forward Cedric Desruisseaux, the team’s most valuable player on most nights.

Carrying a season-long 14-game point streak that includes at least one goal in his last 13 outings, Desruisseaux has already shattered the franchise’s previous high-water mark set at seven-straight contests with a tally, while he is also the first QMJHL player to reach 13-straight games with a goal since Rimouski Oceanic legend Sidney Crosby.

Only two players have goal streaks of at least 13 games since 2000 – Sidney Crosby and now Cedric Desruisseaux.

“There are a lot of good players who have played (in Charlottetown),” a humble Desruisseaux told Jason Malloy of The Guardian. “All the credit goes to my teammates. They are doing a huge part. Beautiful passes make it easy for me.”

In all, Desruisseaux has registered 27 points on the season to sit second place in the league-wide scoring race, while he is also already more than halfway to the 40 points he put up last year.

Meanwhile, record-setting for the Islanders is also happening between the pipes where St. Louis Blues prospect Colten Ellis remains undefeated on the season with a perfect 9-0 showing, pushing him two past former Charlottetown netminder Matthew Welsh on the franchise’s all-time wins streak list. Making the clinching moment even more special for Ellis was that Welsh was in the stands to take in the contest between the Islanders and Cape Breton Eagles, whose roster includes his younger brother Zach.

“(Welsh) is absolutely a legend here,” Ellis told Malloy. “He was someone that, when I was younger, I definitely looked up to.”

After holding down the starting duties with the Oceanic for the past three seasons, Ellis shifted to Charlottetown for 2020-21, expected to follow Welsh’s dazzling opening act. If the early results are any indication, however, Ellis is undoubtedly up to the challenge.

Shane Wright is used to high expectations so it’s no surprise the Kingston Frontenacs phenom has been a point of focus through the early goings of Canada’s national team selection camp ahead of next month’s World Junior Championship.

Wright, 16, is aiming for a roster spot at the under-20 tournament that typically sees veteran players line the locker room. Should Wright make Canada’s final squad, he will be the first 16-year-old to do so since Connor McDavid then of the Erie Otters took part in the 2014 rendition.

Still, the Burlington, Ont., native is taking the opportunity in stride.

For 16-year-old @KingstonFronts phenom Shane Wright (@shane_wright51), a shot at cracking the @HC_WJC roster is both a dream come true and a well-deserved opportunity.

Debuting with the Frontenacs in 2019-20, Wright put together a formidable first season that saw him finish above a point-per-game pace with 39 goals and 27 assists through 58 appearances, demonstrating the exceptional talent that made him just the sixth player to be granted early admission into the CHL in addition to helping him earn recognition as the CHL Rookie of the Year.

That performance, coupled with Wright’s past showing with Hockey Canada’s Program of Excellence as captain of Team Canada Black at the 2019 World Under-17 Challenge, should help him woo Canadian bench boss Andre Tourigny of the Ottawa 67’s, though that message may have already been delivered.

Wright is among 42 CHL talents including 24 forwards aiming to get the call for Canada. An announcement of final roster selections is expected in the days leading up to the 2021 World Juniors, with Canada’s first game scheduled for December 26 versus Germany in what will begin the Great White North’s chase to its 19th gold medal in competition history.

Scott Carter has reason to celebrate after the Spokane Chiefs general manager earned a two-year contract extension that will keep him with the club through the 2022-23 campaign.

It’s a well-earned pact for Carter, who since joining the Chiefs in 2016 has seen steady improvement from his club each season for a combined 149-97-17-13 record. That stretch is punctuated by a trip to the WHL Western Conference Final in 2019 in addition to a .680-point percentage the following campaign that marked Spokane’s best showing since 2010-11.

“Scott has proven to be an outstanding member of our organization and we are proud to have him as part of the Chiefs family,” said Chiefs managing partner Bobby Brett. “He has earned this extension and we look forward to more success under his leadership in the years to come.”

Under Carter’s tutelage, the Chiefs have developed an impressive collection of NHL talent including Jaret Anderson-Dolan of the Los Angeles Kings and Kailer Yamamoto of the Edmonton Oilers, one of two first-round picks alongside New Jersey Devils budding blue-liner Ty Smith. Meanwhile, the next wave of talent coming from the Chiefs also includes 2019-20 Four Broncos Trophy winner Adam Beckman, a Minnesota Wild prospect, as well as a pair of 2020 NHL Draft selections in Bear Hughes and Jack Finley who heard their names called by the Washington Capitals and Tampa Bay Lightning, respectively.

Prior to joining the Chiefs, the 59-year-old Carter served in amateur and professional scouting capacities with the Anaheim Ducks, Toronto Maple Leafs, and Vancouver Canucks.