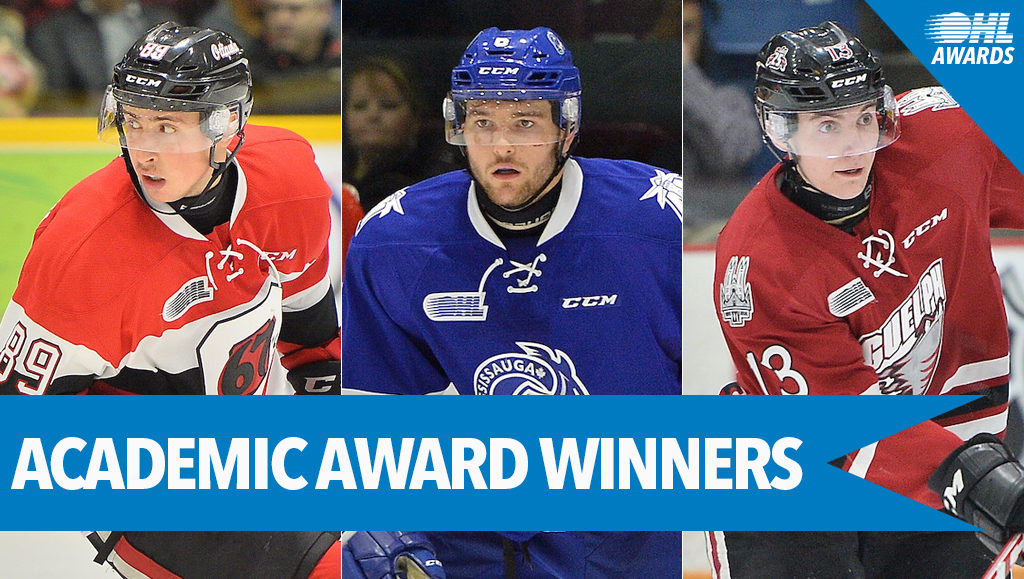 Toronto, ON – The Ontario Hockey League today announced the recipients of the league’s three Academic Player of the Year awards for the 2016-17 season.

Sasha Chmelevski of the Ottawa 67’s is the recipient of the Bobby Smith Trophy as Scholastic Player of the Year, with Stephen Gibson of the Mississauga Steelheads earning the Roger Neilson Memorial Award as the Top Post-Secondary School Student, and Quinn Hanna of the Guelph Storm named the Ivan Tennant Memorial Award recipient for Top High School Student.

All three players will be formally presented with their awards at the annual OHL Awards Ceremony on Thursday June 8.  Chmelevski will be the OHL’s nominee for CHL Scholastic Player of the Year which will be announced on Saturday May 27 as part of the events at the 2017 Mastercard Memorial Cup in Windsor.

“I’m very humbled and honoured to win the Bobby Smith Award,” said Chmelevski. “I would like to thank my family, my school and teachers, our academic advisor and the Ottawa 67’s organization for allowing me to receive an education while playing hockey.”

The 17-year-old from Northville, Michigan, scored 21 goals and 22 assists for 43 points in 58 games played during his first full season in the nation’s capital.  The first round pick of the Sarnia Sting in the 2015 OHL Priority Selection joined the 67’s midway through last season and is now among the top OHL players eligible for the 2017 NHL Draft listed 43rd among North American players by NHL Central Scouting.  Last season he was a finalist for the Ivan Tennant Award for Top High School Student.

“Sasha embodies the true meaning of dedication to hockey and academics,” said 67’s Academic Advisor Eileen Duffin. “He approaches his studies as a mature, disciplined and self-motivated student. An American player who wanted to complete his high school studies with a Michigan State Diploma, Sasha took advantage of the opportunity to take online university level courses and completed his Diploma almost a term earlier than his peers. Few players can manage to work as independently as Sasha does with a regular daily schedule at home or on the road. His post-secondary goals are lofty, as he investigates studying medicine or optometry, all dependent on his equally lofty hockey goals.”

Each year the Bobby Smith Trophy is presented to the OHL Scholastic Player of the year who best combines high standards of play and academic excellence.  The trophy is in honour of Bobby Smith, a former Ottawa 67’s star who exhibited a standard of excellence in both of these areas.  First presented in 1980, Chmelevski is the fourth member of the 67’s following Doug Smith (1980-81), Ryan Kuwabara (1989-90), and Danny Battochio (2005-06) to claim the award named after one of their own.  Past winners also include three-time winner Dustin Brown (Guelph 2001-03), Steven Stamkos (Sarnia 2007), Matt Duchene (Brampton 2009), Dougie Hamilton (Niagara 2011), Darnell Nurse (Sault Ste. Marie 2013), back-to-back recipient Connor McDavid (Erie 2014-15), and Nicolas Hague (Mississauga 2016).

Finalists for the award include fellow 2017 NHL Draft prospects Alex Formenton of the London Knights and Nick Suzuki of the Owen Sound Attack.

Stephen Gibson is a Ryerson University student excelling in Business courses that include Human Resources Management, Intro to Financial Accounting, Principles of Marketing, and Microeconomics.  This marks the second straight season the Top Post-Secondary Student is also a member of the Steelheads as Gibson follows former teammate Damian Bourne who earned the award in 2015-16.

“I am honoured to be this year’s recipient of the Roger Neilson Award,” said Gibson. “I value the importance of education, and the Ontario Hockey League allows me to achieve this, while pursuing my goal of playing pro hockey. I’d like to thank the Steelheads organization and academic support staff, including academic advisor Lauren Wilson, for helping me coordinate my classes and exams in consideration of my rigorous hockey schedule.”

The 20-year-old from Kitchener, Ont., is playing in his third full season with the Steelheads who chose him in the seventh round of the 2013 OHL Priority Selection.  On the ice the defenceman contributed three goals and seven assists for 10 points in 65 games for the Central Division champions.

“Awards like these reflect positively on the strides that our academic program has taken over the past few seasons,” said Steelheads Assistant General Manager Jan Egert. “It’s a great honour for players like Stephen Gibson and Damian Bourne to be rewarded for their academic achievements, and for players who take education while playing in the OHL very seriously to be recognized. There is no shortage of candidates on our hockey club that deserve recognition for their post-secondary academic achievements this season, including players like Jacob Ramalho, Austin Osmanski, Marcus Dickerson, and Nicolas Hague.”

The Roger Neilson Memorial Award is named in honour of the Hall of Fame Coach who served behind the Peterborough Petes bench in the late 1960’s and early 1970’s.  Neilson, a former high school teacher, was a pioneer in stressing the importance of education to all of his players.  First presented in 2005, past recipients include two-time winners Danny Battochio (Ottawa 2005-06) and Derek Lanoue (Windsor 2010-11), followed by Kyle Pereira (Guelph 2012), Daniel Altshuller (Oshawa 2013), Patrick Watling (Sault Ste. Marie 2014), and Justin Nichols (Guelph 2015).

Finalists for the award include Jacob Golden of the London Knights, and Austin Hall of the Guelph Storm for the second straight season.

“It’s a huge honour to win this year’s Ivan Tennant Academic Award,” said Hanna. “I was very fortunate to have such a supportive group of people surrounding me this year with the Guelph Storm including Mike Kelly and academic advisor Coleen Driscoll. The list goes on and includes my teammates, coaches, billets and teachers. I can’t thank them enough for the time and energy they put into helping me pursue my academic goals this year.”

The 18-year-old from Peterborough, Ont., was chosen by the Storm in the fifth round of the 2015 OHL Priority Selection.  The defenceman played in 37 games this season with four points including his first career goal scored on February 10 against the Sault Ste. Marie Greyhounds.

“Quinn is simply an exceptional student athlete,” said Storm Academic Advisor Coleen Driscoll. “He is conscientious, dedicated and a very bright young man. This commitment to his academics has enabled him to continue to achieve incredible success in the classroom carrying one of the most demanding course loads for any high school student. Quinn has dedicated himself to his studies, holding himself to an extremely high standard, while effectively balancing his hockey commitments. He is currently considering post-secondary studies in Biomedical Engineering but is also entertaining studies in Astrophysics in the future.  Regardless of his program of study, I have no doubt his level of excellence will be maintained.”

The Ivan Tennant Memorial Award is given to the Top Academic High School Player and is named in honour of Ivan Tennant, who spent a lifetime combining hockey and education.  He was the Kitchener Rangers’ Education Consultant for 20 years and a key figure on the OHL’s Education Consultant’s Committee.  First presented in 2005, Hanna is the second member of the Storm to receive the award following Adam Craievich in 2014.  Past recipients also include brothers Matt and Adam Pelech (Sarnia 2005 and Erie 2012), Freddie and Dougie Hamilton (Niagara 2009 and 2010), and recent winners Stephen Dhillon (Niagara 2015) and Kyle Keyser (Flint 2016).

Finalists for the award include Colton Incze of the Niagara IceDogs, along with Cade Robinson of the Erie Otters and Dennis Busby of the Flint Firebirds.

All 20 of the OHL’s member clubs provide nominees for each award with the Bobby Smith Trophy nominees representing the 2016-17 OHL Scholastic Team: