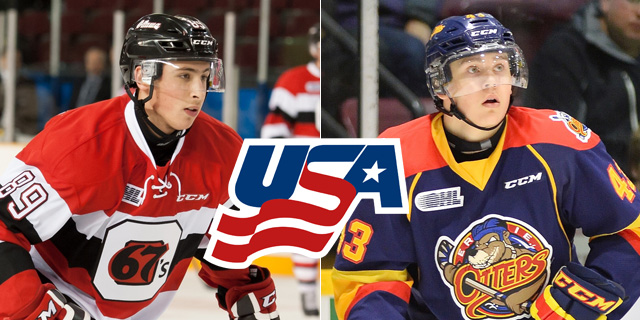 Toronto, ON –  The Ontario Hockey League today announced that two OHL players will compete with the U.S. Under-18 Select Team at the 2016 Ivan Hlinka Memorial Tournament August 8-13 in Breclav, Czech Republic, and Bratislava, Slovakia.

A 17-year-old native of Northville, Michigan, Chmelevski was acquired by the 67’s midway through his rookie season after being a first round selection by the Sarnia Sting in the 2015 OHL Priority Selection. Chmelevski registered 11 goals, eight assists and 19 points over 34 games in a season cut short due to injury.

A 16-year-old native of Novi, Michigan, Vanya Lodnia was a first round pick by the Otters in the 2015 OHL Priority Selection and recorded 16 goals, 23 assists and 39 points over 62 games as a rookie last season. He recorded four assists over 13 playoff games with the Otters, who reached the Western Conference Final for a third straight season.

Additionally, Kitchener Rangers prospect Dylan Seitz, who committed to the club in recent months, was also named to the roster.

The Ivan Hlinka Memorial Cup is an annual event held each August for national under-18 teams from around the world. Named for one of the first Czech hockey stars, the tournament began in 1991 as a three-team showcase. Between 1997 and 2002, the format shifted to the current eight-team tournament. It was then named after Hlinka in 2007, three years after his passing.