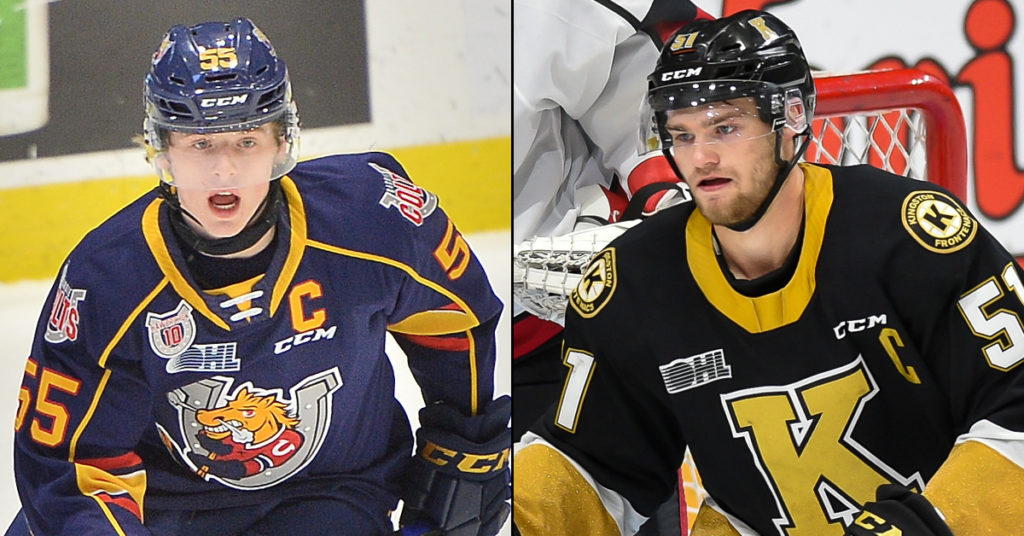 Hoping to make their first ever World Junior appearances, Barrie Colts’ Brandt Clarke of the Los Angeles Kings and Kingston Frontenacs’ Shane Wright of the Seattle Kraken have been loaned to Canada’s National Junior Team ahead of World Junior Selection Camp. The two will join five other OHL players previously invited.

Captaining Canada’s 2021 IIHF Under-18 team to Gold, Wright was on the 2022 World Junior Championship team before the tournament was cancelled last year, but was not on the team in the rescheduled summer tournament as he prepared for his first NHL season.

The Burlington, Ont. native was selected by the Kraken with the fourth overall pick in the 2022 NHL Draft. Lacing up in eight games this year, Wright recorded his first NHL goal on Tuesday against the Montreal Canadiens. Additionally, the 18-year-old centreman has been successful in the AHL this season, scoring four goals in five games for the Coachella Valley Firebirds. One of six players to be granted exceptional status into the OHL, Wright was selected first overall by the Frontenacs in the 2019 OHL Priority Selection. The forward recorded 32 goals, 62 assists and 94 points in 63 regular season contests last season.

The Los Angeles Kings have also loaned Clarke to the team, giving the Canadian squad a boost on the back end.

Selected eighth overall in the 2021 NHL Draft, Clarke looks to be a big contributor on this year’s World Junior squad. The 6-foot-2, 188 lbs. blueliner has played in nine games for the Kings this season, as well five games with the team’s AHL affiliate in Ontario, Calif. Clarke has recorded two assists in the NHL and a goal and an assist at the AHL level. A native of Nepean, Ont., Clarke was the Colts’ first pick (4th overall) in the 2019 OHL Priority Selection. Having a breakout year with the Colts, Clarke tallied 59 points (11-48-59) in 55 games in 2021-22, ranking fifth in points among all OHL defencemen.

Clarke and Wright were OHL Cup champions together in 2019, guiding the GTHL’s Don Mills Flyers to a win over the Toronto Red Wings, with Wright gathering an assist on the game winning goal.

Canada’s National Junior Team will also hold a five-day training camp at the Garcelon Civic Centre in St. Stephen, N.B., from Dec. 14-18 in preparation for the 2023 World Juniors before taking on Switzerland, Slovakia and Finland in pre-tournament action.

The 2023 IIHF World Junior Championship begins on Boxing Day with four games, including Canada taking on Czechia at the Scotiabank Centre in Halifax at 7:30 p.m. AT. TSN and RDS, the official broadcast partners of Hockey Canada, will once again provide extensive coverage of the event, broadcasting all 31 tournament games, as well as all three Team Canada pre-tournament games. TSN Radio will also provide comprehensive tournament coverage.