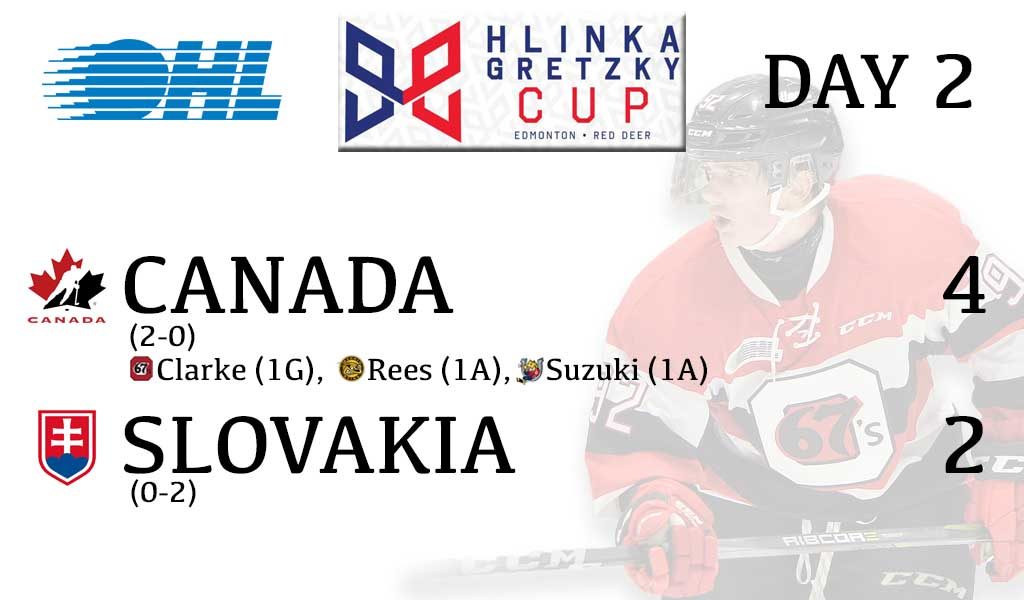 Edmonton, Alta. – Graeme Clarke (Ottawa 67’s) scored the eventual game winner on the power play 1:18 into the third period before Josh Williams (Medicine Hat Tigers) took a feed from Jamieson Rees (Sarnia Sting) to give Canada insurance in a 4-2 win over Slovakia on Day 2 of the Hlinka Gretzky Cup.

Andrej Golian and Artur Turansky scored third period goals to bring Slovakia to within a goal with just over 10 minutes remaining before Williams reinstated the two-goal cushion at 12:12 of the final frame.

Alexis Lafrenière (Rimouski Oceanic) led the way with a goal and an assist while Dylan Holloway also tallied and defenceman Justin Barron (Halifax Mooseheads) finished the night with two assists.

Canada outshot the Slovaks 58-19 as goaltender Taylor Gauthier made 17 saves to help his club improve to 2-0, outscoring opponents 14-2 in the process.

While it was a closer affair than Monday’s 10-0 win over Switzerland, Williams saw the hard-fought affair as a good primer as Canada prepares to face undefeated Sweden on Wednesday, suiting up for their third game in as many nights.

“The adversity [of a close game against Slovakia] will help us in the long run; getting our legs going, working a little bit harder,” he said “I think it will help us get going for tomorrow night against the Swedes. We’ve got to beat [Sweden]. First place is a big advantage in this tournament – getting the home ice and the last change. We basically have to focus on tomorrow and beating the Swedes.”

After a 4-2 loss to Sweden on Monday, Slovakia falls to 0-2 in the tournament as Canada dictated the pace at Rogers Place.

Canada is back in action Wednesday night in Edmonton, taking on Sweden (2-0) at Rogers Place when the puck drops at 7:00pm MT/9:00pm ET.