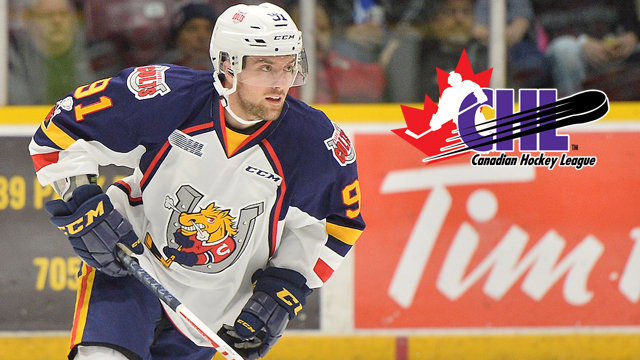 Toronto, ON – The Canadian Hockey League today announced that Ottawa Senators prospect Aaron Luchuk of the Barrie Colts is the CHL Player of the Week for the week ending February 18 after recording nine points in three games including three goals and six assists with a plus-minus rating of plus-3.

Luchuk produced three straight multi-point performances last week that led the Colts to three straight victories officially securing a playoff berth and maintaining their lead atop the OHL’s Central Division standings with a current record of 34-20-2-1.  He earned back-to-back first star honours on the road including Wednesday against the Flint Firebirds with a goal and two assists in an 8-5 Valentine’s Day victory, and Thursday in his return to Windsor facing his former Spitfires where he scored the overtime winner and added three assists in a 5-4 triumph.  His week wrapped up Saturday scoring a goal and an assist claiming third star honours in a 3-1 win over the Niagara IceDogs.  Luchuk is the first two-time recipient of the award this season earning the honour with both the Spitfires and the Colts.

A 20-year-old from Kingston, Ont., Luchuk is playing in his fourth full OHL season after being chosen in the fourth round of the 2013 OHL Priority Selection by the Spitfires.  He played 236 career games in Windsor and scored the game-winning goal in the 2017 Mastercard Memorial Cup before joining the Colts in December.  Luchuk leads the OHL in scoring with 95 points in 57 games including a league-high 43 goals and is currently riding a 15-game point-streak.  He was signed by the Senators to an entry-level contract as a free agent in December.