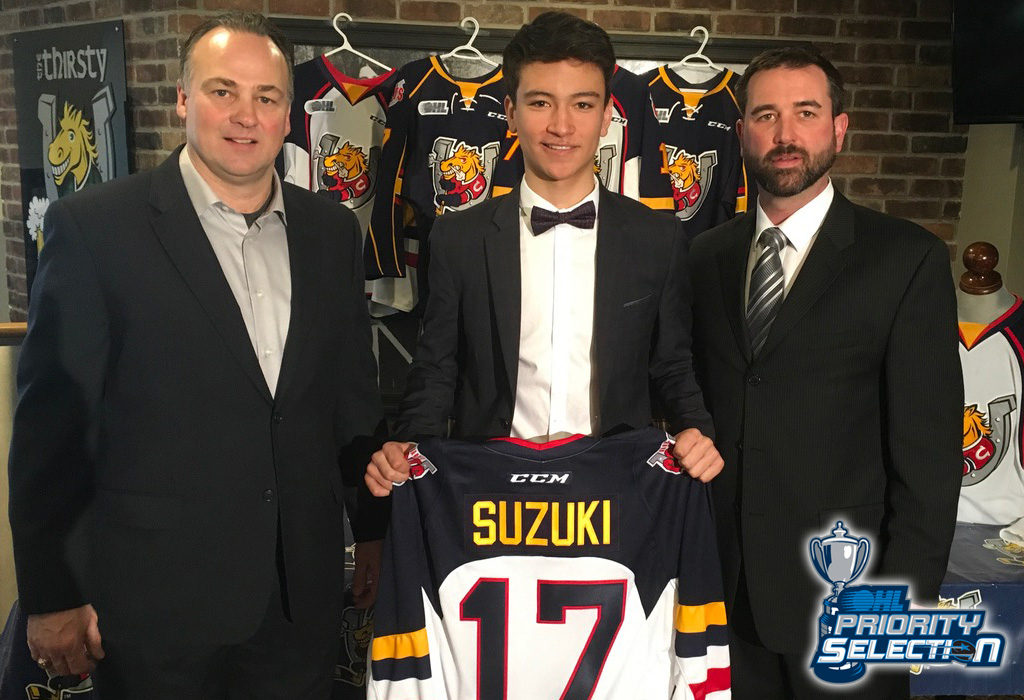 Toronto, ON – The Ontario Hockey League in association with the Barrie Colts Hockey Club today announced that 15-year-old forward Ryan Suzuki of the ALLIANCE’s London Jr. Knights will be the first overall pick in the 2017 OHL Priority Selection.

The announcement was made at a news conference held today in Barrie where Suzuki was introduced to local media.

“The opportunity to have the first selection in the OHL Priority Selection is exciting for us,” said Colts General Manager Jason Ford. “When you have the ability to add a player of the calibre of Ryan, that makes a big difference to the team going forward. Hats off to our scouting staff. It’s always a big job to make sure you’ve seen as many players as possible and with a deep draft this year, it was lots of work. We’re very happy that Ryan chose the OHL and thrilled that he will be a Barrie Colt.”

Suzuki was named the ALLIANCE Minor Midget Player of the Year after leading the league in scoring with 19 goals and 40 assists for 59 points in 32 games helping the Jr. Knights capture their seventh straight league title qualifying for the OHL Cup as the tournament’s top ranked team.  Following his Minor Midget campaign, Suzuki joined the GOJHL’s London Nationals and helping them secure a Western Conference title.

“I really like the kind of player Ryan is,” said Colts Head Coach Dale Hawerchuk. “He leads by example and it’s great to have a player like that coming onto the team. He sees the ice exceptionally well, has skill, can score, but he’s also is a playmaker. I think he’ll be a key asset for us and make a big impact, and we really like him off the ice too. His brother is obviously doing very well in this league and I’m excited to start working with Ryan.”

“I am extremely excited and honoured to be chosen first overall in this year’s OHL Priority Selection,” Suzuki said.  “It’s an amazing feeling.  I want to thank the Barrie Colts ownership, management team and scouting staff for having confidence in me.  I’m looking forward to meeting my new teammates and being part of a championship team here in Barrie. And it will be fun playing against my brother and the Attack this year”, he added.

Suzuki is the 2017 recipient of the Jack Ferguson Award presented annually to the player selected first overall in the OHL Priority Selection. The “Fergie” recognizes the dedication and contributions made by Jack Ferguson during his 25 year association with the OHL, first as a scout with the Ottawa 67’s and followed by his appointment as head of the OHL’s Central Scouting Bureau in 1981 as its Director of Central Scouting.  Suzuki is the third member of the Colts to receive the award following Daniel Tkaczuk in 1995, and Aaron Ekblad in 2011.  The past five recipients include Ryan Merkley, David Levin, Jakob Chychrun, Travis Konecny, and current NHL scoring leader Connor McDavid.

“Ryan is one of the most skilled players in this year’s Priority Selection,” says OHL Central Scouting Director Darrell Woodley. “He is the type of player that makes everyone around him better. Ryan is an unselfish player that sees the ice better than most in this age group. He makes plays that a lot of people don’t see developing from the stands and his passes are usually tape-to-tape. He is a good skater with the ability to beat players off the rush. He is dangerous every time he is on the ice and will be an offensive force in the OHL.”

Suzuki will be a feature guest on the live 2017 OHL Priority Selection Draft Show beginning at 9:00 am on Saturday April 8, 2017.  The draft show along with live results feed will be available at www.ontariohockeyleague.com.  For the tenth straight year, media and fans can watch the first three rounds live online with host Terry Doyle who will be joined on set by Darrell Woodley and Tim Cherry of OHL Central Scouting to provide analysis, interviews, and video footage of the next wave of OHL stars.