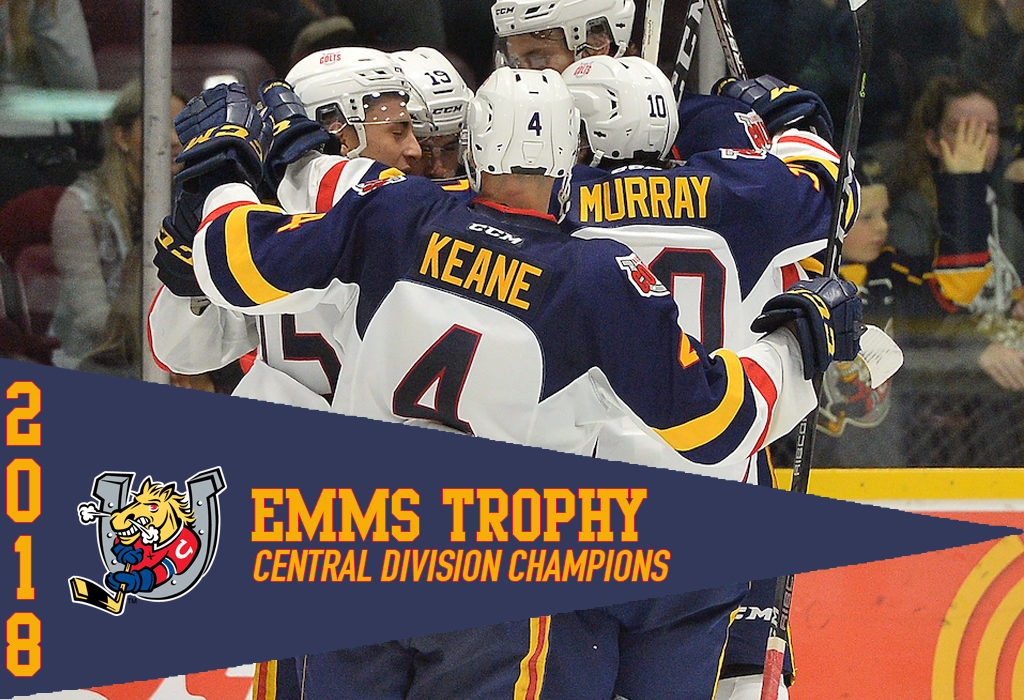 The Barrie Colts are heating up in the stretch drive toward the postseason, defeating the conference-leading Hamilton Bulldogs 6-3 on the road Wednesday to claim their fifth straight win.

Veteran forward Lucas Chiodo had two goals and two assists while top scorers Aaron Luchuk and Dmitry Sokolov both had a goal and two helpers as the Colts locked down their third Central Division title in the last four years, improving to 39-21-2-1.

Game over! Colts win 6-3 and have clinched the Central Division! #ThisIsOurTime pic.twitter.com/uA2C2SddO3

Barrie’s 266 goals for are the most in the Eastern Conference as mid-season acquisitions Luchuk and Sokolov are well over 40 on the season while rookie phenom Andrei Svechnikov scored his 35th in just his 39th game of the campaign on Wednesday.

By winning the Central Division the Colts claim the Emms Trophy which was first presented in the 1975-76 season when the OHL was split into divisions with the expansion of the league to 12 teams. The award originated in recognition of long-time Barrie and Niagara Falls Flyers head coach Leighton ‘Hap’ Emms for his contributions to junior hockey in Ontario.

Having improved a full 40 points and counting from their last place finish in 2016-17, the Colts win their seventh Central Division title in franchise history and fourth under current head coach Dale Hawerchuk.

They return to the OHL Playoffs after missing out last spring. Prior to that absence they’d won eight playoff series over the prior five years including an Eastern Conference title in 2013.

The Colts will be pursuing their first OHL Championship since 2000 when the 2018 OHL Playoffs get underway.