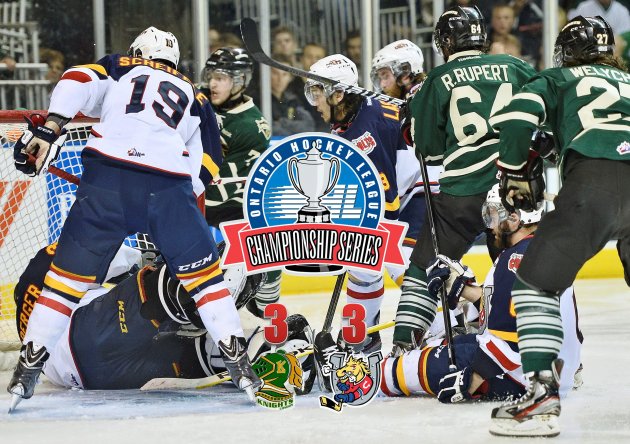 The 2013 Rogers OHL Championship Series for the Robertson Cup will go the full distance with Game 7 between the Barrie Colts and the London Knights set for tonight in London.

The Knights enter Game 7 on the heels of a thrilling overtime victory in Game 6 despite a four-goal third period comeback by the Colts to force the extra frame.

The Colts have already won once in London this series opening the best-of-seven with a 4-2 road win.

Both teams are close in offense with the Colts scoring 25 goals this series compared to the Knights 24 goals.  The Knights have outshot the Colts 132-109.

Mark Scheifele has been the Colts’ top scorer in the series with 14 points through six games including seven goals and seven assists.  Seth Griffith has 10 points in six games for the Knights including four goals and six assists.

Tonight marks the 10th time since 1987 where the Robertson Cup will be awarded following a Game 7 showdown.  In those nine games the home team has a 6-3 record.

Here is a list of the past nine matchups that went seven games in the OHL Finals.

2011 – Jarrod Maidens scored in overtime to lead the Owen Sound Attack to a 3-2 road victory in Game 7 over the Mississauga St. Michael’s Majors.

2008 – Nick Spaling scored the game-winner for the Kitchener Rangers in a 4-1 win at home over the Belleville Bulls.

2000 – Tim Verbeek scored twice including the game-winner for the Barrie Colts who beat the Plymouth Whalers 4-2 on the road.

1999 – Jonathan Cheechoo scored five goals to lead the Belleville Bulls to a 9-2 win over the London Knights on home ice.

1996 – The Peterborough Petes defeated the Guelph Storm on the road.

1990 – The Oshawa Generals defeated the Kitchener Rangers on home ice.

The winner between the Knights and Colts will join the WHL’s Portland Winterhawks, the QMJHL’s Halifax Mooseheads, and the host Saskatoon Blades in the 2013 MasterCard Memorial Cup May 17-26.