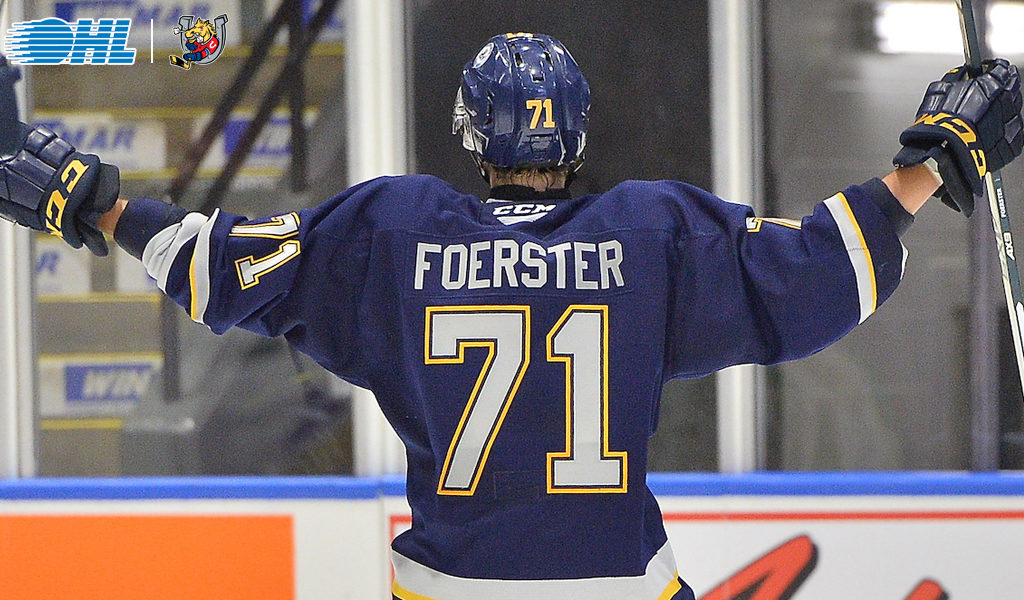 At the beginning of the season, Tyson Foerster set out to score 20 goals and earn 30 assists.

Upon heading into his sophomore stint with the Barrie Colts, he decided he’d aim to double his rookie outcome of 10 goals and 13 helpers, channeling the best piece of advice he’s received: “Never give up. On the puck, on your dreams.”

A self-described “shoot first” player with a strong playmaking ability, the 18-year-old winger prides himself on being able to play a multitude of positions; doing anything for the team.

Sam Cosentino spotlights #NHLDraft prospect @tfoerster8 who has risen to prominence with a strong @OHLHockey season leading @OHLBarrieColts in scoring and a breakout performance in Hamilton at #CHLKTP.

He boasts his shot as a key component of his multi-faceted game; a quick release that doesn’t allow much reaction time from the defenders or goaltender. He can jump on the power play last minute, he can bring the puck in tight, he can block shots or excel on the penalty kill. You might compare his game to that of the Washington Capitals’ T.J. Oshie, in that you may not notice him as the quickest skater on the ice, but you’ll see that he covers many aspects of the game.

The 2020 NHL Draft hopeful, who kisses his stick at the conclusion of the national anthem every game, has adopted more than just a new ritual this year. He’s stronger, improving on his skating, and has been playing with a wealth of newfound confidence. It’s no wonder he blew past his 50-point goal.

Over 62 appearances, Foerster leads a young Colts lineup with 80 points to his name; 36 goals and 44 assists. Holding down fifth place in the Eastern Conference, it’s been an up and down road for the team, littered with inconsistent wins and losing streaks, a coaching change, and the absence of Dale Hawerchuk in his battle with stomach cancer.

Foerster’s assumed a leadership role that has continued to broaden, especially following the departure of Carolina Hurricanes first rounder Ryan Suzuki, a deadline capture by the Saginaw Spirit, and former captain Jason Willms, who headed to London within the same time frame.

A #CHLKTP double dose of @tfoerster8! 🚨🚨@OHLBarrieColts forward with a nice finish to give Team ⚪️ the lead after @OHLHoundPower‘s @rorourke8 lugs the puck up-ice. pic.twitter.com/CPF7BkwP9Z

Losing leaders is part of the game – as Foerster puts it, they’re in the past now – but he holds onto the lessons he’s learned along the way in cultivating his own role as a leader. Heading into the 2020 Kubota CHL/NHL Top Prospects Game in mid-January, Foerster remembered the advice Suzuki gave him, having taken part in the event the season prior.

The advice paid off.

Foerster scored back-to-back goals as part of a three-point effort to guide Team White to a 5-3 victory at the Top Prospects Game, with that glowing confidence on full display. He was named Player of the Game and received praise from Director of NHL Central Scouting Dan Marr, who commented on how he unquestionably elevated his game.

He did it in front of a sold out crowd that included 46 of his friends and family members, although playing in front of a slew of his own fans is something he’s used to. It comes as a perk of staying out in the city where he saw out his minor hockey career; only 30 minutes away from his hometown of Alliston.

Foerster spent two years with the Barrie Colts AAA system before hearing the Colts call his name in the third round of the 2018 OHL Priority Selection.

“I was just sitting on the couch watching [the draft] on my phone with my dad and we were like ‘oh my god, I’m staying in Barrie,” he remembers.

It’s also a perk his teammates will occasionally bug him about.

Leading the charge in Barrie may have not have been the primary objective, but between his dominant season atop the Colts scoring campaign and his commanding Top Prospects performance, Foerster’s development has been accelerating at a swift pace.

Now, looking ahead, there’s really only one goal, and it’s a simple one: get drafted by an NHL team.

“I think whoever says they don’t look at the rankings is lying,” he said. “You obviously check the rankings to see where you’re at, but you just have to focus on your own game and try to get better.”

And in tandem with his growing confidence and developing game, he has high hopes for the future of his team.

“We’re really young right now, one of the youngest teams in the league,” said Foerster. “I think we’re going to be really good in a couple years and be able to go for a Memorial Cup.”