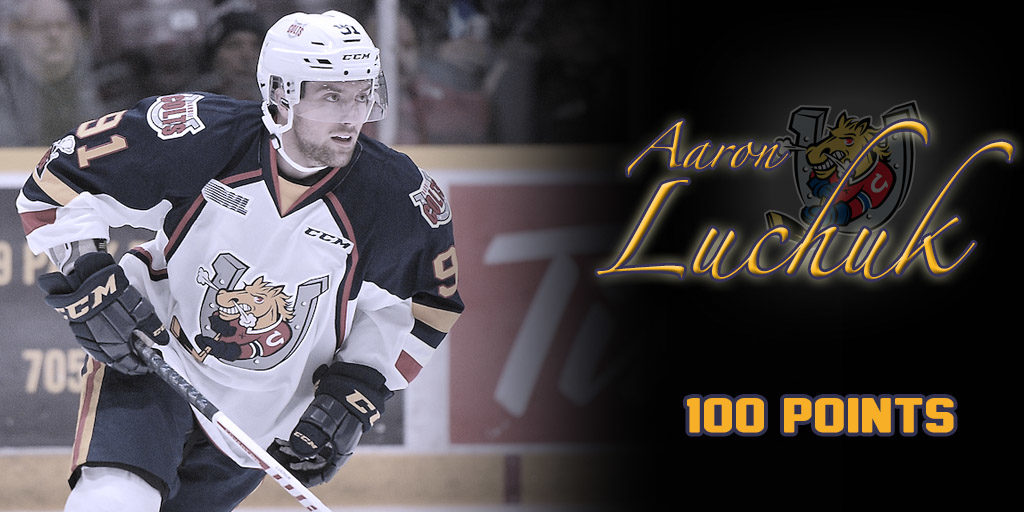 With a goal and an assist on Friday in Niagara, Ottawa Senators prospect Aaron Luchuk passed the 100-point threshold as the Colts defeated the IceDogs 7-2 for their third straight win.

Acquired by the Colts in mid-December, Luchuk picked up where he left off in Windsor, recording 16 goals, 34 assists and 50 points in 31 games as a Colt as the club has surged into the Central Division lead.

Luchuk is the latest in a recent line of big-time scorers in Barrie, following 100-point producers in Kevin Labanc and Andrew Mangiapane in 2015-16 as well as Joseph Blandisi and Mangiapane in 2014-15. In total, Luchuk’s 100-point campaign is the 12th in franchise history as he joins a pair of back-to-back century markers in Bryan Little (2005-07) and Sheldon Keefe (1998-2000) on that list.

WATCH THIS: 💯 for @ALuchuk91!@Senators prospect scores his league leading 4️⃣4️⃣🚨 to join the #OHL century mark in points for @OHLBarrieColts. pic.twitter.com/QX6cGxUj0F

Luchuk scored the game winning goal in the championship game of the Mastercard Memorial Cup last spring, guiding the Windsor Spitfires to a national championship on home ice.

He signed a three-year entry level NHL contract with the Ottawa Senators on December 27th.