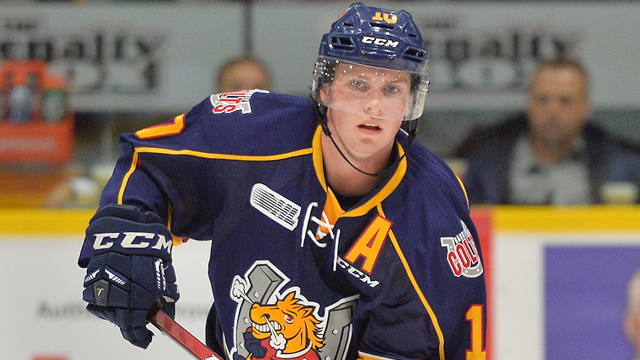 Barrie, ON – The Barrie Colts announced Thursday that 19-year-old defenceman Justin Murray has been named captain for the 2017-18 season.

The London, Ont. native is a 135-game OHL veteran currently in his third season after being an eighth round pick by the club in the 2014 OHL Priority Selection. The 6-foot, 184Ib. left-shot defenceman has a goal and three assists through his first four games of the 2017-18 season.

“It’s definitely an honour and a privilege to wear it,”  Murray told Gene Pereira of the Barrie Examiner. “If you look at the wall upstairs, there are so many guys up there that were such great leaders and it’s just a privilege I get to wear the ‘C’.”

“He’s a heart and souler,” Hawerchuk told Pereira. “He plays hard all the time. He’s a great kid and he’s well respected. I think all of our captains are good heart and soul guys and all bring different things to the table. But Justin we thought was a great pick for us.”