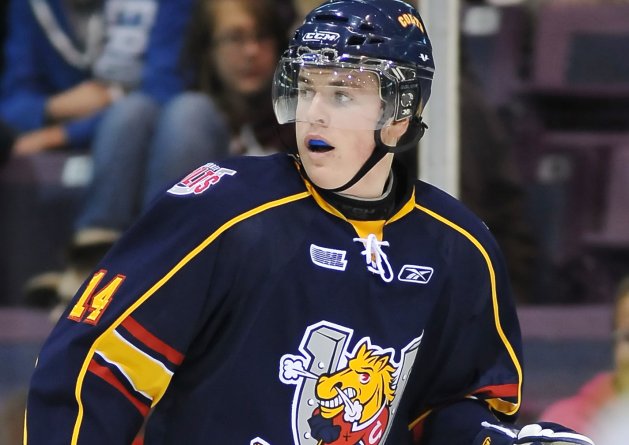 Toronto, ON – The Ontario Hockey League today announced that forward Tanner Pearson of the Barrie Colts is the first OHL Player of the Week for the 2011-12 season.  For the week ending September 25 Pearson led the OHL with eight points including five goals and three assists in two games with a plus-minus rating of plus-5.

Pearson led the Colts to two straight wins to open the regular season beginning with a 7-4 victory over the Kingston Frontenacs in the Colts’ home opener Thursday night at the Barrie Molson Centre.  In that contest Pearson was named second star of the game picking up two goals, including the club’s first goal of the season, and adding three assists for his first career five-point game.  On Friday night in Brampton, Pearson grabbed first star honours spoiling the Battalion season opener with his first career hat-trick tallying all three goals for the Colts in a 3-1 win.

Pearson, a 19-year-old from Kitchener, ON, is playing in his second OHL season with the Colts after recording 42 points in 66 games last season.

Also considered for the award this week was Pearson’s teammate Colin Behenna who finished second in league scoring with seven points in two games scoring a goal and six assists.  Kerby Rychel of the Windsor Spitfires scored twice and added four assists for six points in three games.  In goal, Michael Houser of the London Knights won two games including a shutout victory with a goals-against-average of 0.48 and save percentage of .988.