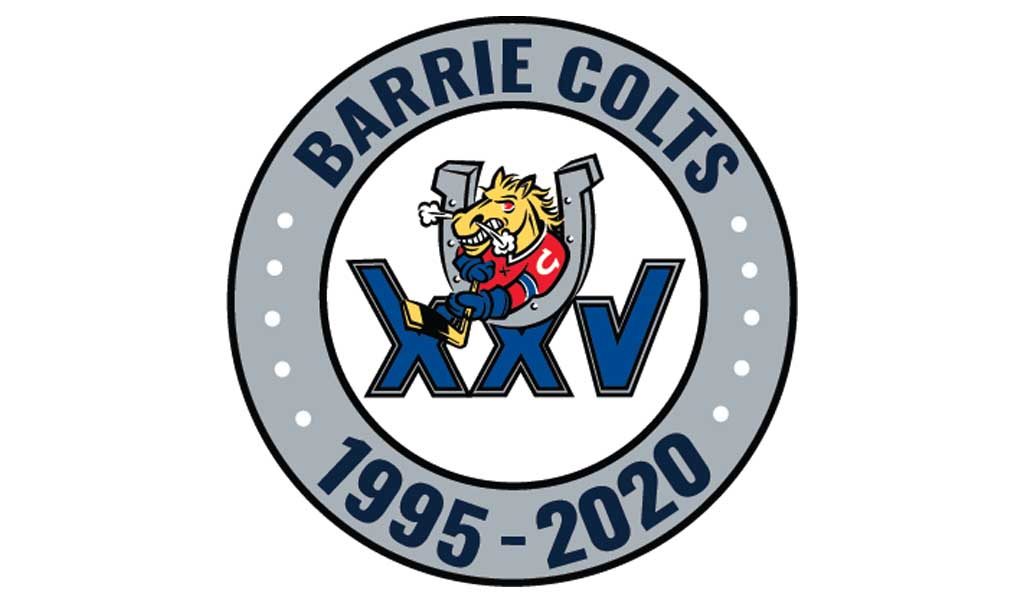 This year we celebrate 25 years of Barrie Colts OHL hockey. Our rich history has many milestones through it’s first quarter of a century and we are beyond excited to reveal our logo to celebrate our silver anniversary.

The ups and downs along our journey have formed our identity and have created memories that will last a lifetime. From our first ever pick of Daniel Tkaczuk in 1995 and the first head coach in franchise history, Bert Templeton, to the memories of Luch Nasato with the chants of ‘LUUUUCH’ ringing around the Molson Centre walls, the OHL Championship season in 2000 to the heartbreak loss in the Memorial Cup Final.

The fiery spirit of Bud Stefanski behind the bench for three seasons to the calmer waters of Marty Williamson taking charge. Michael Hutchinson stealing a first round series versus the Brampton Battalion in just five games as the #7 seed.

How about the Bryan’s holding some of the greatest Barrie Colts franchise records. Bryan Little with the most points as a Colt with 342 from 2003-07 or Bryan Cameron for goals in a single season with 53 in 2009-10. Even more impressive, Kevin Labanc‘s 127 point season in 2015-16, which is also most in a single season in franchise history. Hockey Hall of Famer, Dale Hawerchuk being named head coach of the club in 2010 and currently stands as the longest tenured coach in franchise history.

How about the toughest season of all for Barrie Colts hockey, ending up with selecting Aaron Ekblad who was granted exceptional player status in 2011. The heartbreak of 2012-13, losing to the London Knights in the OHL Championship Series with just 0.1 seconds left on the clock.

Another two first overall selections in 2017, grabbing Ryan Suzuki (OHL Priority Selection) and Andrei Svechnikov (CHL Import Draft) who both had their names called by the Carolina Hurricanes in back to back NHL Drafts (2018 and 2019).

The 22 players who have played at the World Juniors, representing eight different countries (Canada, USA, Russia, Czech Republic, Slovakia, Germany and Finland). Banners upon banners, with eight Central Division Championships, four Eastern Conference Championships and of course the one OHL Championship banner hanging from the rafters.

So many memories that cannot and will not be forgotten. These years have shaped us visually and emotionally and we cannot wait to see what awaits us in this next stage.