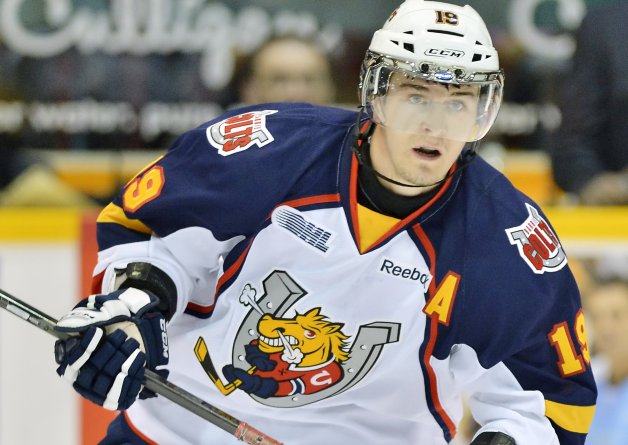 Toronto, ON – The Ontario Hockey League today announced that forward Mark Scheifele of the Barrie Colts is the OHL Player of the Week after leading the league in scoring for the week ending March 10 with nine points in three games including six goals and three assists with a plus-minus rating of plus-4.

Scheifele led the Colts to three straight wins last week putting them in a first place tie with the Belleville Bulls atop the OHL’s Eastern Conference Standings with 88 points heading into the final week of the 2012-13 regular season.  Scheifele’s week was highlighted by a five-point game on Sunday afternoon where he recorded his fifth hat-trick of the season netting the game-winner while collecting two assists as first star of a 6-5 win over the Niagara IceDogs.  Earlier in the week Scheifele claimed first star honours against the Sudbury Wolves on Thursday scoring twice with two assists in the 5-1 win, then was named second star on Saturday with a shorthanded goal as part of a 3-2 overtime win over the Bulls.

Scheifele, who turns 20-years-old this week, is a Kitchener, ON, native playing in his third OHL season with the Colts.  A first round pick of the Winnipeg Jets in the 2011 NHL Draft, Scheifele is 13th in league scoring and has set career-highs in goals and points this season with 38 and 77 respectively through 43 games.

Also considered for the award this week was Alexander Khokhlachev of the Windsor Spitfires with eight points in two games scoring three goals and five assists, and Cody McNaughton of the Guelph Storm with seven points in four games scoring three goals and four assists.  In goal, Daniel Altshuller of the Oshawa Generals went 2-0-0-0 with a goals-against-average of 1.50 and save percentage of .958.