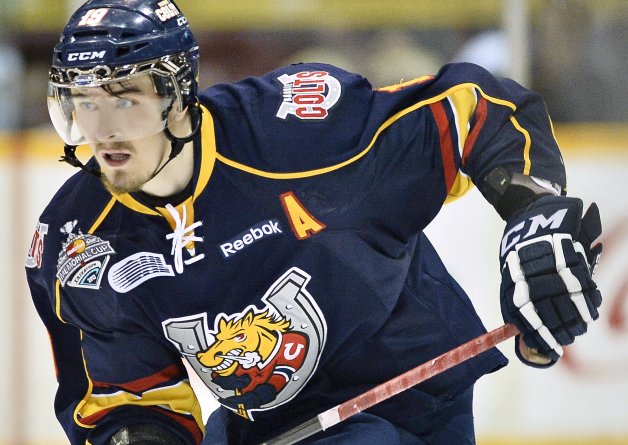 Toronto, ON – The Ontario Hockey League today announced that forward Mark Scheifele of the Barrie Colts is the OHL Player of the Week for the second straight week after recording 12 points in four games including six goals and six assists with a plus-minus rating of plus-4 for the playoff week ending May 12.

Scheifele opened the week with back-to-back five-point games in Barrie to give the Colts a 3-1 series lead over the London Knights in the Rogers OHL Championship Series.  He scored two goals and three assists as first star of a 6-3 win in Game 3 last Monday night, then produced another five-points on Wednesday night in Game 4 scoring four goals in the third period to help the Colts comeback from a 3-1 deficit to win 6-4.  Scheifele collected two assists on Friday in a 6-4 loss to the Knights in Game 5, but was held without a point in Game 6 of the series on Saturday night where the Colts fell 5-4 in overtime.  The Colts now face the Knights in Game 7 of the Rogers OHL Championship Series for the Robertson Cup on Monday night in London.  The Colts last won an OHL title in 2000 with a Game 7 victory on the road against the Plymouth Whalers.

Scheifele, a 20-year-old from Kitchener, ON, is playing in his third OHL season with the Colts.  The Winnipeg Jets prospect selected in the first round of the 2011 NHL Draft currently leads the 2013 OHL Playoffs in scoring with 41 points in 21 games after finishing the regular season with 79 points in 45 games.

Also considered for the award this week was the Knights’ Ryan Rupert with eight points in four games including four goals and four assists, while the Colts’ Zach Hall also picked up eight points in four games scoring two goals and six assists.  In goal, the Knights’ Jake Patterson won both of his starts and posted a goals-against-average of 3.95 and save percentage of .857.