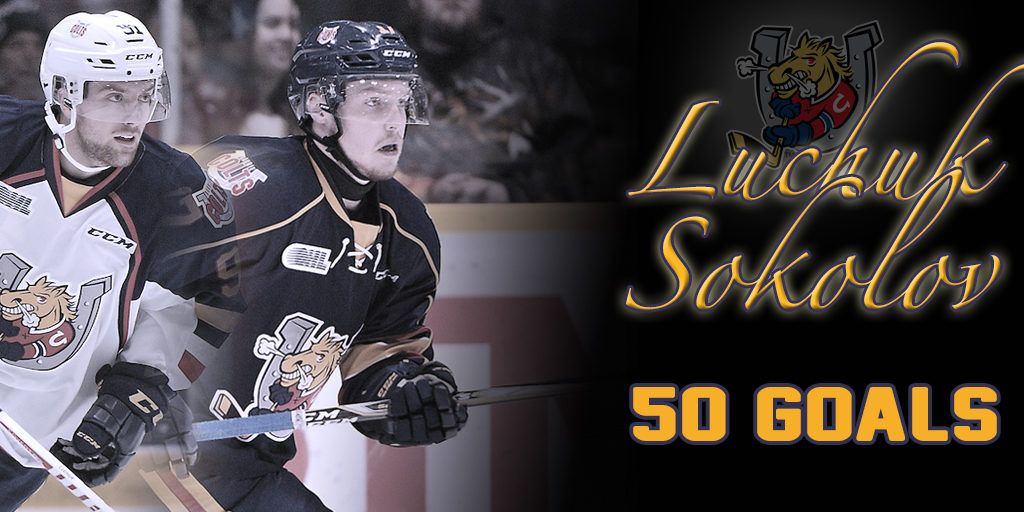 Barrie Colts teammates Aaron Luchuk and Dmitry Sokolov both hit the 50-goal mark on Friday night in Sudbury, becoming the first set of OHL teammates to reach the half-century mark in one season since 2006.

The Central Division champions skated to a 6-4 win over the Wolves, improving to 41-21-4-1 on the campaign.

Sokolov scored his 50th 9:13 into the first period as Luchuk and blueliner Tyler Tucker drew assists. The 19-year-old accomplished the feat in his 63rd game of the season, giving him 128 goals on his OHL career.

With the game knotted at four just beyond the midway point of the third period, Luchuk struck on the power play for the game winner with assists from Andrei Svechnikov and Lucas Chiodo. Luchuk’s 50th comes in his 67th game of the season, also standing as his 115th career marker.

Both players can thank teammates on two different teams for their individual goal-scoring successes this season as Luchuk split his production between the Colts and Windsor Spitfires while Sokolov spent the season between Barrie and Sudbury.

Luchuk and Sokolov are the first Colts to score 50 in a single season since Andrew Mangiapane (51) last did so in 2015-16.

The Colts round out their regular season schedule on Saturday night in the back end of a home-and-home against Sudbury before embarking on the 2018 OHL Playoffs as the second place team in the Eastern Conference.